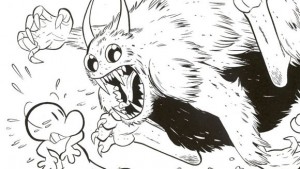 Of all the comics out there, Jeff Smith’s self-published fantasy epic Bone, recipient of innumerable Harvey and Eisner awards is certainly not one you would think of as the subject of controversy. Yet it was last week when a Minnesota parent petitioned her school district to remove Bone comics from her son’s elementary school library.

Parent Ramona DeLay made the request of Independent School District 196 after she saw depictions of drinking and smoking in a Bone #4: The Dragonslayer, which her son checked out of the school library. From the article:

“That week was his DARE graduation week, and I was a little shocked that my son was reading a graphic novel that had illustrations and content relating to drinking and smoking and gambling,” DeLay said. “We’d just celebrated his graduating DARE and he was reading about everything they taught him not to do.”

Writing about the incident for The Comics Reporter, Tom Spurgeon speaks in the book’s defense.  Spurgeon writes, “To my eye, the incidents in the book are no different than in any number of books I read at that age, even age-appropiate books, and the absolute wide-spread saturation of this comic with this being a first complaint would seem to support that viewpoint.”

A review committee will be convened to hear and consider DeLay’s complaint. In the last 20 years, there have been 20 such complaints made, resulting in the removal of three books. The last removal request was made in 2006, and the last actual removal of a book from the library in 1997.