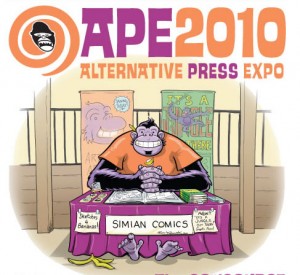 This weekend, the Alternative Press Expo takes over the Concourse Exhibitions Center in San Francisco! APE is the West Coast’s premiere exhibition of literary and art comics, and this year will boast special guests including Lynda Barry, Daniel Clowes, Vanessa Davis, Keith Knight and more.

The CBLDF will be there, represented by organization President and Beanworld creator Larry Marder and Executive Director Charles Brownstein, who will both be leading programs at the event. The CBLDF booth, 300, will boast a display of original art and prints, all available for modest donations to the Fund. Come celebrate the future of comics and support the CBLDF at APE!

Marketing a Comic That’s Easier to Read Than to Describe.
Sunday, 10/17 at 12 PM

Presenting a comic as peculiar as Beanworld to the public is hard today; imagine how difficult it was more than a quarter of a century ago. Larry Marder shares his story of the strategy he deployed to get discovered, find a publisher, and find the right message to break through the clutter of the mid-80s comic book marketplace.

Hear how the lessons Marder learned then have sustained Beanworld’s public image to this very day, and how those strategies can help you!

CBLDF: The Fight For Intellectual Freedom
Sunday 10/17 4:45-5:30
More than 50 years after Fredric Wertham’s Seduction of the Innocent, comics and other media still come under the attack of censors. Charles Brownstein, executive director of the CBLDF, is joined by cartoonists Keith Knight, Larry Marder, and other panelists for a discussion of current trends in comics censorship and how we all can get involved in protecting intellectual freedom.