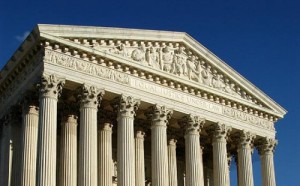 Yesterday, the Supreme Court heard oral arguments in Schwarzenegger v. EMA, a case addressing whether states can ban the sale of violent video games to minors without also violating the First Amendment. A full transcript of oral arguments has been made available here. Coverage emerging since arguments concluded yesterday indicates that the Court appears skeptical towards the California law’s constitutionality.

The Supreme Court on Tuesday expressed sympathy for a California law that aims to keep children from buying ultra-violent video games in which players maim, kill or sexually assault images of people.

But justices seemed closely split on whether the restrictions are constitutional.

The high court has been reluctant to carve out exceptions to the First Amendment, striking down a ban on videos showing graphic violence to animals earlier this year.

The Court had stepped into the controversy over the California statute when there was no dispute among lower courts: they had struck down all such statutes tested before them. In [California’s lawyer Deputy State Attorney General Zackery P.] Morazzini’s part of the argument on Wednesday, it was not apparent why the Justices had taken on the case, since there was only one member of the Court — Justice Breyer — who showed an inclination to uphold the law. Most of the other Justices treated the California measure as much too broad and thus, if upheld, serving as an invitation to go after violence in movies and cartoons, books and comic books, and virtually every other medium of expression.

The New York Times’ Adam Liptak unpacks that issue, looking at the case in the context of U.S. v. Stevens:

Still, most of the justices seemed to agree that a ruling in favor of the California law would require a novel extension of First Amendment principles to expressions concerning violence.

In April, in United States v. Stevens, the court struck down a federal law making it a crime to sell videos of dogfights and other depictions of animal cruelty by an 8-to-1 vote, saying the court was not prepared to create a new category of speech outside the bounds of the First Amendment.

“How is this any different,” Justice Sonia Sotomayor asked, “than what we said we don’t do in the First Amendment field in Stevens, where we said we don’t look at a category of speech and decide that some of it has low value?”

Zackery P. Morazzini, a lawyer for California, said the state should have flexibility in limiting speech where minors are involved.

The methodology of the Stevens decision, which left open the possibility that a more tightly drafted law might survive constitutional scrutiny, may provide the court with a template for its ruling on the California law.

The justices themselves seemed divided with regard to the government’s interests in keeping violent video games from minors. At USA Today, Joan Biskupic writes:

“From Grimm’s Fairy Tales to the Vulcans of Star Trek to the Mortal Kombat video game, the justices raised examples of violence that might concern parents yet also might be shielded from regulation based on First Amendment speech rights.

Some, such as Justice Antonin Scalia, emphasized the value of violence in American culture and suggested that all video games should be protected by the First Amendment, as the lawyer representing industry groups asserted Tuesday.

Others, such as Justice Stephen Breyer, expressed revulsion at some of the violence in today’s video games and raised a hypothetical question involving “gratuitous torture … of babies.” Breyer said that if parents want their children to play such games they should go buy the games for them.

Though the justices peppered both sides with questions, they showed greatest skepticism for the state’s argument that government should be able to restrict minors’ access to violent video games, as the Supreme Court has long allowed regulation of minors’ access to sexually explicit materials.

Scalia is known for focusing on the original intent of the Founding Fathers who created the Constitution and the Bill of Rights. He asked Morazzini: “Was there any indication that anybody thought, when the First Amendment was adopted, that there — there was an exception to it — for speech regarding violence? Anybody?”

The LA Times’ David G. Savage reports that Justices Breyer and Roberts were sympathetic to the State’s position:

“Why isn’t it common sense,” said Justice Stephen G. Breyer, that if the law can forbid selling pictures of a “naked woman” to a young teen it can also forbid the sale of scenes “of gratuitous torture of children” in a video game?

Chief Justice John G. Roberts agreed, citing scenes from the game “Postal 2” in which girls are smashed in the face with a shovel and their bodies set on fire. “We don’t have a tradition in this country” of exposing children to that kind of graphic violence, he said.

Writing for the Wall Street Journal, Jess Bravin shows that Justices Ginsburg and Sotomayor expressed skepticism for video games having a lower level of protection:

Justice Ruth Bader Ginsburg asked why the state limited the restriction to videogames. “Why are video games special? Or does your principle extend to all deviant, violent material in whatever form?” she asked.

California’s Mr. Morazzini argued violent videogames are worse because they are interactive. Lawmakers relied on studies suggesting that videogames are “exemplary teachers of aggression” because the player personally commits virtual acts of “obscene violence.”

One study “says that the effect of violence is the same for a Bugs Bunny episode as it is for a violent video,” said Justice Sonia Sotomayor, who asked if the state would outlaw Bugs Bunny.

“Cartoons do not depart from the established norms” of how much violence children “have been historically exposed to,” Mr. Morazzini replied.

[Video game industry attorney Paul] Smith contended, however, that California’s law was the latest in a series of adult overreactions to new media including comic books and rock music that they feared would poison youth.

The Comic Book Legal Defense Fund wrote an amicus brief in support of the video game industry, emphasizing that very issue and how it led to the comics industry being decimated in the wake of government scrutiny in the 1950s.

Alongside the CBLDF’s amicus brief over two dozen briefs were filed in support of the EMA by groups ranging from the entertainment industry establishment to the pillars of First Amendment community. The stakes are high, as Kotaku’s Stephen Totlio
writing for MSNBC describes:

A decision by the Court in favor of the video game industry would likely end California’s pursuit of laws against violent games and leave restrictions against games to the industry’s ratings board and to parents.

A decision in favor of California would make video games the only type of media content in the United States that can be illegal to sell to children based on severity of violent content, a decision that would affirm that games have distinct affects on a young audience that other forms of entertainment do not — or that that the speech in games is not seen meriting the same protection as that in other media.

A decision in this case is expected by July.

To support the CBLDF in performing this and other legal work, please consider making a contribution.