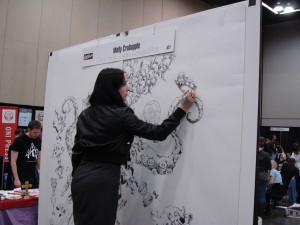 The weekend kicked off at the Stumptown Comics Welcome Dinner at the BridgePort Brewpub in the Pearl district. Festival organizers Indigo Kelleigh and event organizer Megan Skye Hale welcomed CBLDF supporting donors for an evening of comics conversation. Matt Wagner, Carla Speed McNeil, Brandon Graham, Steve Leiber, Dustin Weaver, Eric Powell, and Molly Crabapple were there to chat creative and make sketches for the CBLDF supporters who came to the event.

Across town, exhibitors and artists gathered at Guapo, a comics & coffee shop, for the Maisie Kukoc Award for Comics Inspiration. Comics readings by Jon Lewis, Karen Snider, Chris Cilla, Jonas Madden-Connor, and Daria Tessler led off the night, which concluded with a presentation of the Kukek to Damien Jay.

The following morning, the Festival exhibit floor opened. Volunteer Angela Moeny joined CBLDF Executive Director Charles Brownstein & President Larry Marder to spread the word about free expression. The Fund offered a wide-ranging selection of underground comix as well as the “I Read Banned Comics” t-shirt to supporters, raising $1,200 over the course of the weekend.

Elsewhere on the show floor, artist Molly Crabapple drew a massive 2-panel mural to benefit the CBLDF. Standing over 7 feet tall and 5 feet wide, Crabapple spent the entire weekend embellishing the giant piece, which will be auctioned next week to benefit the Fund.

Saturday night brought the Stumptown Comics Awards followed by a live art battle of the sexes between the women’s team of Cat Farris, Emi Lenox, Natalie Nourigat, Joelle Jones, and Amelia Altavena and the men’s team of Jeffrey Brown, John C. Worsley, Ryan Alexander-Tanner, Lukas Ketner, and Ron Chan. Christian Lipski has the full report. Elsewhere, Oni Press had a suite party where cartoonists challenged each other at Rock Band.

The festivities continued on Sunday with the show floor, and a closing reception at Pony Club, a comics focused art gallery downtown where exhibitors assembled to reflect on the weekend.

Over the years Stumptown has grown from a small assembly of local creators to a destination for artists and aficionados from across the country. As the convention continues to grow, it is refreshing not only for the art on display but for the warm and involved community of locals who have turned their passion for comics into an inviting community affair that’s unique among North American comics events.

Big thanks also to all the fans and members who came out to support CBLDF at Stumptown! You’ll find us next at the Los Angeles Times Festival of Books, April 30 – May 1 on the University of Southern California campus!