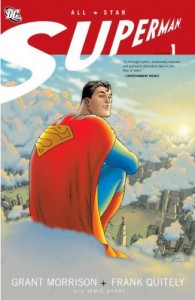 The first volume of the groundbreaking series by Grant Morrison and Frank Quitely, this Eisner-winning and best-selling comic took elements from 70 years-worth of Superman adventures and reinvented them for a new millennium.

After a rescue trip into the Sun, Superman returns more powerful than ever but stricken with a terminal condition. With little time left, he has to complete Twelve Legendary Labors. Along the way, we see new visions of the characters and locales in Superman’s world that fans have come to love, including Bizzaro, Lex Luthor, Jimmy Olsen, the Phantom Zone, Kandor, and Lois Lane.

Already considered a classic, All-Star Superman is a perfect series for old and new fans alike.

This softcover edition is signed by both Grant Morrison and Frank Quitely. Get your copy now!