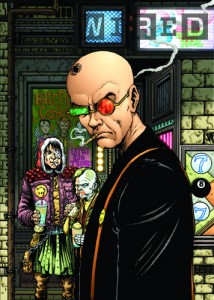 This May will see the release of the Transmetropolitan art book, which celebrates the visionary dystopian comic series by Warren Ellis and Darick Robertson. Funded entirely by a Kickstarter donation drive, proceeds from the sale of the book benefit CBLDF and The Hero Initiative.

Wired.com has an exclusive preview of artwork from the book. They touched base with CBLDF about the project:

“Transmetropolitan is one of those rare works that functions as a compelling genre story, perceptive science fiction and cutting social satire all at the same time,” said Charles Brownstein, executive director of Comic Book Legal Defense Fund, in an e-mail to Wired.com. “The series uses edgy, and sometimes taboo, topics to address the changes that are happening to our society, and that’s what expressive speech is supposed to do. Transmet does it exceedingly well.”

Wired.com also spoke with Ellis, Robertson, and Brian Pulido of The Hero Initiative about the project. You can catch the full article and exclusive images here.