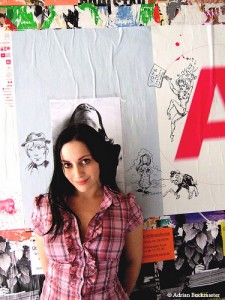 Molly Crabapple wanted to make a huge statement about her support for Free Speech. With attacks on comics on the rise and border searches increasing, Crabapple saw a need to do her part. So, she created a monstrous masterpiece to benefit CBLDF — a masterpiece that you can bid on!

Created during the Stumptown Comics Festival and measuring in at 8 feet high and 7 feet wide, every inch of the piece is covered with Crabapple’s intricate pen work. A true participatory performance piece, it incorporates suggestions from convention attendees, from tentacles to bottles of scotch. As staggering as the dimensions of piece are, it is all the more stunning for the amount of detail Crabapple incorporated into it.

“I love the energy of creating something massive surrounded by a crowd,” says Crabapple, “and to feed off that energy and draw something that I love. It was an honor to make an art monster for CBLDF.”

CBLDF Executive Director Charles Brownstein adds, “As the founder of Dr. Sketchy’s Anti-Art School, Molly has been an adamant supporter of Free Speech and CBLDF. She’s an established name in the fine art world and a rising star in comics. It’s a privilege to have her support for CBLDF, and the piece she created is nothing short of spectacular.”

The auction for this artistic tour de force is live now. Bids can be placed online here.

Don’t miss your chance to support Free Speech by bidding on this gorgeous piece of art by Molly Crabapple! All proceeds benefit the First Amendment work of CBLDF. Help CBLDF fight the attacks against Free Speech for the comics community by bidding generously!

← Larry Marder’s CBLDF Liberty Cards Diary #1
Comics Alliance: Why Comics Get Confiscated & How to Protect Yours →