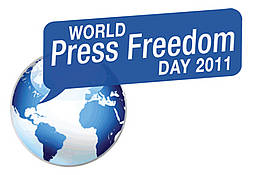 The First Amendment Center took a moment to recognize the freedom of the press that makes the United States so unique, citing that 84% of the nearly 7 billion people in the world do not share in this freedom. You can read their article about World Press Freedom Day here.

World Press Freedom Day takes place each year on May 3. It was started in 1993 by the UN General Assembly, with the following in mind:

[World Press Freedom Day] serves as an occasion to inform citizens of violations of press freedom — a reminder that in dozens of countries around the world, publications are censored, fined, suspended and closed down, while journalists, editors and publishers are harassed, attacked, detained and even murdered.

CBLDF will be taking a moment to enjoy the work of our favorite political cartoonists and journalists today, all the while keeping in mind that the freedom our press enjoys does not extend to the rest of the world.

You can learn more about World Press Freedom Day here.

← CBLDF Gets Festive at LA Times Festival of Books
Transmetropolitan: All Around the World on Bleeding Cool →