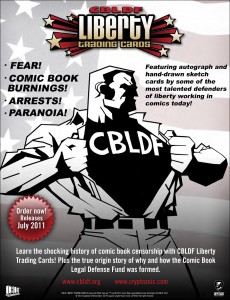 I’m Larry Marder, creator of Beanworld and President of the Board for the Comic Book Legal Defense Fund, and I’m here today to talk about the CBLDF Liberty Trading Cards.

So what are these cards?

Let me tell you!

Ripped from the lurid headlines of yesteryear, the CBLDF Liberty Trading Cards relate the history — told in words and pictures — of comic book censorship in the United States of America.

You’ll find all that and much more in the shocking history of comic book censorship and authoritarian abuses of the First Amendment!

Plus: The true origin story of why and how Comic Book Legal Defense Fund was formed, and why CBLDF tirelessly fights for the First Amendment rights of the comic book community to this very day!

In addition to the 72 beautifully illustrated base cards, there are randomly inserted bonus autographed photo cards! And look out for one-of-a-kind Artist Sketch Cards, each hand-drawn by the most talented defenders of liberty working in comics today!

Starting next week, I’m going to start leaking all sorts of exclusive behind-the-scenes peeks and spoilers at what we’re doing and who we’re doing it with!

Do not miss it!