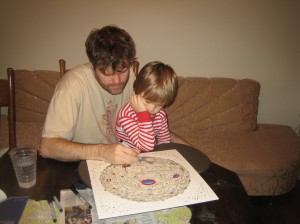 Jeffrey Brown finds truth in the personal and intimate details that dominate our lives. Even his most autobiographical work is relatable, adeptly capturing the unease we all occasionally feel as we go about life.

Brown’s first book, Clumsy, defined his ability to articulate the bittersweetness and awkwardness that follows most people around, an ability that is further demonstrated in Ignatz winner I Am Going to Be Small, Unlikely, Little Things, and Funny Misshapen Body. Brown is also an established humorist and absurdist, as shown in the observational humor of Cat Getting Out of a Bag and Cats Are Weird and the superhero parody Incredible Change-Bots.

In person, Brown is quiet but articulate, a keen observer of the people and things around him — he always seems to be looking for the next drawing or story. On the eve of his Incredible Change Bots art opening at Brooklyn’s Scott Eder Gallery, Brown took a moment to talk about his motivations for supporting free expression in this installment of The Good Fighters .

CBLDF: This year you’ve been an incredibly avid supporter of the CBLDF by contributing hand drawn member cards, doing appearances, and plenty more.  What turned you on to CBLDF in the first place, and why do you regard our work as worthy of your support?

Jeffrey Brown: When I first moved to Chicago I was picking up the CBLDF newsletter from local shops like Chicago Comics, and once I started going to comic conventions I was meeting everyone who worked with the CBLDF — and of course, Chris Staros, my publisher at Top Shelf, was on the board and then became president of the CBLDF for a while. So, I was learning a lot about what work the CBLDF was doing from the time my comics making career began. Growing up in Michigan, I’d seen first hand multiple examples of the problem of censorship — for example, an attempt to ban from the high school classroom an e.e. cummings poem for its possible interpretation as sexual metaphor. Being in a relatively conservative atmosphere like that has made me very sensitive to the need for making sure that the freedom of expression for artists is protected, and as a cartoonist, the CBLDF is an obvious place for me to help participate in that effort.

CBLDF: Some of the comics that you’re best known for inhabit the autobiography genre, which has sparked controversy over the years. From recent issues, such as a library needing to defend the memoirs Blankets and Fun Home, to outrage about early works from folks like R. Crumb, autobiographical comics tend to push people’s censorship buttons. Why do you think this is?

Brown: I think with fiction, it’s easier for some people to write off certain ideas — they’re less real, or there’s some kind of distance that people can read them with. As soon it’s a true story, it becomes dangerous to some people’s eyes because it threatens their world view — there’re things they can allow as long as they aren’t real. In my case, some of my work has included explicit sexuality, but it’s not pornographic, which is the drawback to comics — people can see the nudity without bothering to understand what it means, which is a pretty narrow way to look at the world. I think those are probably the same people who raise a ruckus about women breast-feeding in public.

CBLDF: Have you ever encountered censorship or challenges to your work?

Brown: Only in a roundabout way, fortunately. Michigan had a law where material with sexual content couldn’t be displayed where minors could possibly access it. So when I was visiting my home town, I went into one of the comic shops and saw my first book Clumsy sitting behind the counter. No one would be buying that book, or browsing through it, if they weren’t asking for it; essentially, the possibility of someone stumbling on my book and buying it was pretty much eliminated.

CBLDF: This week you have an art opening at the Scott Eder Gallery. Tell me about the differences you’ve encountered in attitudes towards subject matter from the comics world versus the art world?

Brown: Especially in America, comics are still a medium often associated with kids, so the nudity and sex that might be common in painting, film and literature is perhaps looked on as more shocking. Michelangelo’s sculpture of David is considered one of the great works of art, despite the full frontal nudity, but somehow showing a penis in comics becomes some kind of unnatural, harmful depiction. Generally, the art world seems much more well adjusted in its sexuality than the comics world.

CBLDF: What are your biggest areas of concern for free expression in comics?

Brown: I think my biggest concerns are access and interpretation. In terms of access, I think it’s important that people are allowed to decide for themselves whether they want to look at something or not. I think parents should play a larger role than government. People are different and should be able to judge for themselves what they’re comfortable with and what they want to allow their children to read. Interpretation is the other big issue — many times the people upset about something, or the people in position to censor, don’t understand the context or are misinterpreting things. It’s important that the laws aren’t established in ways that allow one person’s tastes or understanding to dictate whether something is offensive, let alone whether that something is or isn’t available to the public.

CBLDF: Why should people join you in supporting the CBLDF?

Brown: Recently the CBLDF prepared a pamphlet of advice to cartoonists for crossing the border – and then just this past week, a few American cartoonists had work confiscated while heading into Canada for the Toronto Comics Art Festival. The CBLDF needs support both to inform the public as well as to actively defend free speech. I think sometimes people view this as a slippery slope question, but  I see it as not just that the laws might someday be adjusted to affect the work you make or like, but it’s a question of how people can and will use the laws as they are now to assert their own ideas and limit the expression of ideas they disagree with. People who advocate free speech need to be just as active and involved as the people who advocate censorship, or there’s bound to be more censorship.