Today marks the 40th anniversary of the Supreme Court’s decision on Cohen v. California — a decision that still shapes how the First Amendment is interpreted and protected today.

The First Amendment Center took a moment to remember the case, which centered on one man’s First Amendment right to protest the Vietnam War by wearing a jacket bearing the words “Fuck the Draft.” In 1968, Paul Robert Cohen was arrested in California for disturbing the peace by offensive conduct. Cohen’s conviction was ultimately overturned by a majority decision in the Supreme Court.

The First Amendment Center breaks down precisely why the decision is so important:

The Court’s 5-4 ruling in Cohen v. California cleared a wider field for freedom of speech in several ways. It limited the fighting-words doctrine, rejected application of the obscenity doctrine to profanity, emphasized that offensive speech deserves protection and warned against the prospect that the government could ban words to discriminate against unpopular views. 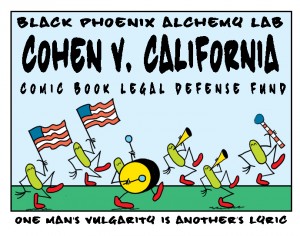 As Justice John Marshall Harlan wrote in his majority opinion, “one man’s vulgarity is another’s lyric,” reinforcing the idea that even unpopular speech is protected by the First Amendment. You can read the entire article from The First Amendment Center here.

CBLDF recently celebrated Cohen v. California with the release of an exclusive fragrance from Black Phoenix Alchemy Lab. With notes of black tea, apricot, honey, saffron, apple blossom, tolu balsam, ginger grass, white ginger root, and vetiver, BPAL’s Cohen v. California is a perfect way to both show your support of CBLDF and to celebrate the First Amendment. You can pick up the scent of Free Speech here!