The Comic Book Legal Defense Fund is a non-profit organization is dedicated to protecting First Amendment rights of the comic book community. That means all of us: creators, publishers, distributors, retailers, librarians, and fans. It’s CBLDF’s mission to spring into action whenever and wherever we are needed to protect freedom of speech.

We are living in transitional times. In the past, much of the suppression of free speech focused on comic book shops. As the 21st century unfolds, some overzealous people forget how the constitution guarantees our rights to express ourselves without the censorship or impediment of government.

Unjust new laws get passed based on junk science, mass alarm, and flawed reasoning—all in violation of citizen’s constitutionally guaranteed rights. American citizens have had their comics and manga collections confiscated, computers have been seized at the Canadian border for the crime of having comics on their hard drive, an individual state passed a law making a criminal out of anyone who posts an image online that might cause “emotional distress.” These are the new battles. They are newly forged links in a very long chain. The freedoms CBLDF protects have been challenged before. The battles have been hard fought. There is a lot of history behind us.

CBLDF Liberty Trading Cards tells the history of those struggles against comic books since they first began in the 1940s. All the proceeds of the set will go to CBLDF to help fund the new battles looming on the horizon as we advance further into the 21st century and its new frontiers of freedom of speech.

CBLDF is funded by the generosity of its members and supporters a few bucks at a time. Our ongoing legal fights are never cheap. They cost money. More money than ever. You can help us right now, today, by joining the Fund. If you’re already a member why don’t you consider making a donation?

CBLDF is very fortunate to have a friend in Cryptozoic Entertainment, who is publishing and distributing the CBLDF Liberty Trading Cards. Diamond Comic Distributors waived its usual distribution fees. Dozens of creators offered their services to draw bonus one-of-a-kind sketch cards. Big-hearted owners of their characters allowed us to let other artists take a crack at their characters for CBLDF.

Today’s generous creator is Todd McFarlane. “Big Toddy” has been my boss twice: at Image Comics and McFarlane Toys. I spent a lot of years thinking about “ol’ Spawny” in his many incarnations across so many platforms.

It was a happy day when Todd gave his blessing to the Fund, allowing us to offer Spawn universe characters in our pool of potential characters for artists to draw for CBLDF Liberty Trading Cards. We’ve received a lot of cards, done by a wide range of artists, in an array of styles. Spawn is truly an artist’s artist character. Folks are having fun at the drawing board: 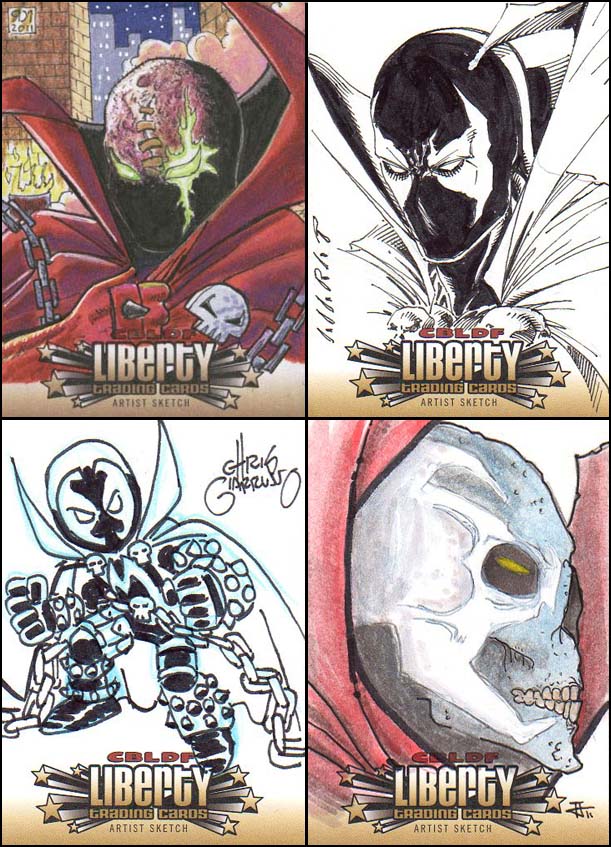 Today’s sneak-peak behind the scenes cards are from upper left and clockwise:

That’s it for today! See you Thursday!