We’re getting all sorts of multiple card tableaus .In the world of high-brow art these multi-paneled works are called diptychs, triptychs, quadriptychs, and so on.

As I’ve said before, I’m well aware of that these connecting subsets of one-of-a-kind sketch cards might drive fans downright batty. But I also know hardcore collectors will be relentless hunters of the individual cards that feature their favorite artists and characters. Hey, the chase of elusive prey is a key part of collecting. We at CBLDF and Cryptozoic Entertainment are just doing our part to keep collecting as challenging and fun as it’s supposed to be.

So first up today is a J.Gonzo two-carder diptych featuring characters from Image Comics’ Eisner winning CHEW, created by the Mighty John Layman and Rob Guillory: 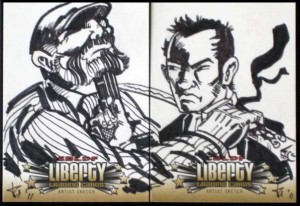 Next is the finished four paneled quadriptych by Dan “FragaBOOM” Fraga that we’ve been watching him build up in pieces over the last week or so.

I’m heading over to Cryptozoic HQ later today to take a look at the cards that have come in this week. Can’t wait to see and then share!

Be here every Tuesday and Thursday for even more sneak peeks behind the scenes at CBLDF Liberty Trading Cards.

← Jason “J.Gonzo” Gonzalez Has Some Serious Love for CBLDF at Phoenix Comicon
CBLDF Joins the Superheroes at HeroesCon! →