Things are really heating up for CBLDF Liberty Trading Cards on my end of things. All sorts of cards are starting to arrive at the Cryptozoic Entertainment offices, and every time I get over there I see something new.

Today, let’s take a look-see at the front of our CBLDF creator autograph cards. All over the realm of comics, writer and artist champions of liberty are signing their names to their pictures to help CBLDF raise the funds necessary to defend everyone’s constitutionally guaranteed rights to freedom of speech under the First Amendment. 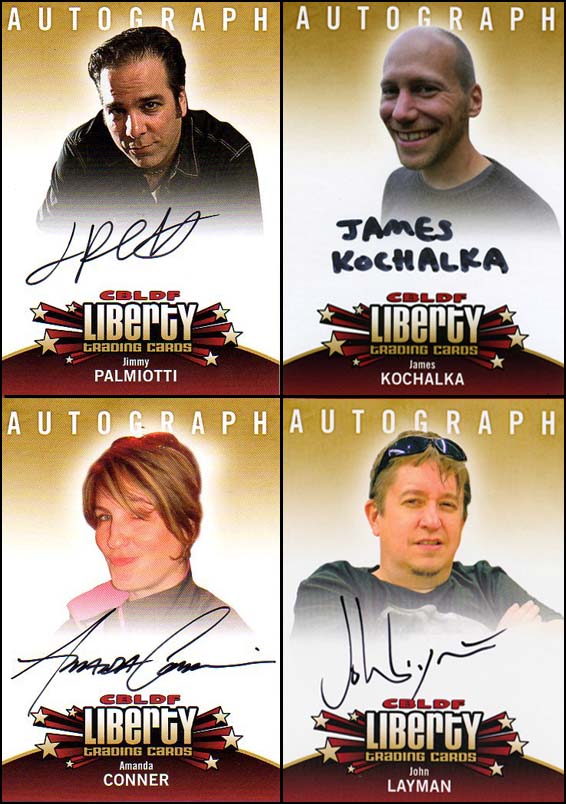 From top left, in clockwise fashion:

James Kochalka: “James Kochalka is the creator of the daily diary comic strip American Elf and the children’s comics series Johnny Boo and Dragon Puncher. On March 10, 2011, he was appointed the first Cartoonist Laureate of the State of Vermont.”

Amanda Conner: “Amanda Conner is an  artist and commercial  illustrator. She began her career in the late 1980s for Archie Comics and moved on to work for Marvel Comics, DC Comics, and Harris Comics and has had her work featured in the New York Times and Revolver magazine, as well as on NBC’s Dateline and A&E’s Biography. Her latest work was a 12 issue run of Powergirl for DC Comics.”

I’m going to wrap up with another peek at work by the astoundingly hardworking and talented Philip Tan. Philip is going to be doing the art on the upcoming Savage Hawkman from DC Comics. Take a look at these beautifully rendered sketch cards Philip drew for CBLDF in what passes for his spare time. What a generous guy he is! 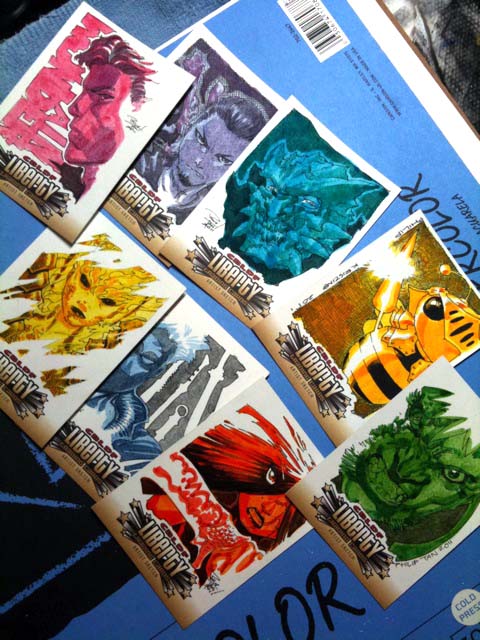 See you on Thursday!