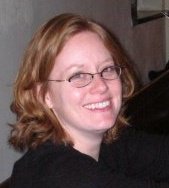 Over the years, CBLDF has been blessed with a varied and devoted cadre of volunteers. Some volunteers have been with us for years, and some, including recent addition Maggie Roll, are just joining the bandwagon.

The CBLDF wouldn’t be what it is without its volunteers, and Roll is no exception. She comes from a family firmly rooted in volunteerism, and she’s always eager to help at the booth, with a ready smile and a joke or two in hand. As a long-time fan of Dr. Who and irreverent comedic scifi by folks like John Scalzi, Roll knows a thing or two about being a nerd.

For this installment of The Good Fighters, we asked Roll about why she became a CBLDF volunteer and her experience as a volunteer.

CBLDF: How did you find out about CBLDF, and what drove you to volunteer?

Maggie Roll: My sister is a long-time volunteer for the group and has been encouraging me to volunteer for several years. Last year I finally had the time away from my paying job to volunteer at C2E2 down in Chicago. I ended up having so much fun helping the CBLDF raise money in Chicago that I flew out to San Diego to volunteer all five days at Comic-Con International.

CBLDF: Why is Free Speech important to you?

Roll: Everyone has their own opinions, thoughts, beliefs, etc., and they should be allowed to express them. While I may not agree with someone’s ideas, it doesn’t mean they can’t express them. That was one of the basic rights given to all US citizens with the creation of the Bill of Rights. And that is one of the greatest things about the CBLDF. CBLDF is fighting to keep our rights in place as they were intended by the Constitution.

I find it funny how many people are offended by the topics discussed in movies or on TV. If you are offended, you DON’T have to watch it, but that doesn’t mean that creators shouldn’t be allowed to produce their work. This is also true in comics — comics don’t influence people any more than any other type of entertainment does. But they are looked at harshly since the medium is supposedly for kids — which is just plain silly. The industry has all types of comics available for you to read, whether you are 5 or 105.

CBLDF: You’re a musician, playing regularly with a symphonic band in your community. How does your experience as a musician dovetail with your desire to help protect free expression?

Roll: I’m not someone who’s ever been considered artistic in the classic sense. I’ve never been able to draw. I’ve never been a great writer. Playing my bass clarinet has always been one of my passions — I get so much joy from being able to create such wonderful sounds. I have been playing the bass clarinet for over 20 years, and last year I finally got to play one of the most recognizable pieces of music ever written – The 1812 Overture. The group I play with is a group of non-professional musicians who just enjoy the music and the camaraderie of the group; we loved playing that piece even though it was incredibly hard and took lots of rehearsing to make sure we didn’t sound horrible! Everyone should be allowed to have an expressive passion, whether it’s playing in a community band or reading, creating, and selling comics.

CBLDF: You come to the CBLDF as a comics neophyte, but you’re a fan of plenty of other nerdy things, like Dr. Who. Why volunteer for CBLDF?

Roll: I have always been a fan of smart, intellectual entertainment, though I do enjoy my fluff too. One of the things I’ve seen in more recent years is the amount of crossover between comics and other types of entertainment, whether it be TV, internet, movies, or radio. Because I’m not a huge comic book person, I’m sure that I wouldn’t have become involved with this specific group if it hadn’t been for my sister. Now that I do help out, I very much enjoy getting all of the comics recommendations from people who visit the booth or work with the CBLDF.

CBLDF: What’s the coolest thing that has happened to you while volunteering?

Roll: At SDCC, Wil Wheaton came by the booth to renew his membership. I very much am a fan of his intelligence and wit, and I like that he helped make nerds cool and part of the mainstream.

CBLDF: How would you recommend other people get involved with CBLDF?

Roll: Contact them! The guys who work full time for the CBLDF — Charles, Brady, and Alex — are great people who truly care about their work. They are always looking for people to help out, even if you only have half an hour of time to spare. Don’t forget that you can live in other parts of the country and still help out. While the CBLDF is based in New York, I live in Wisconsin and I am willing to travel to help out the cause!

CBLDF always needs volunteers. If you’re inspired to volunteer, send us an e-mail!

← CBLDF Joins the Superheroes at HeroesCon!
40 Years On, One Man’s Vulgarity Is Still Another’s Lyric →