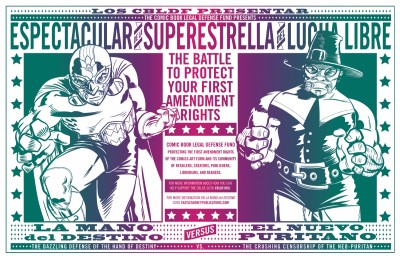 It’s a battle of titans with the First Amendment at stake! In this corner: La Mano del Destino, fighting for your freedom of speech! His opponent, El Nuevo Puritano, bringing the wicked wrath of moral panic and outrageous censorship into the ring!

J. Gonzo will also be appearing throughout the show to make sketches to benefit the Fund, and to sign copies of La Mano del Destino, the tale of a once-champion Luchadore who, after being betrayed, agrees to a Faustian bargain in order to exact his revenge. Mesoamerican myth and high-flying, Lucha Libre action converge to tell this story
of vengeance and destiny. La Mano del Destino #1 will be available for a $5 donation to CBLDF!