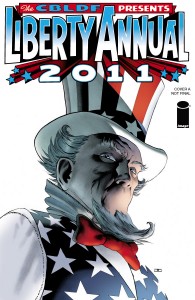 CBLDF Liberty Annual 2011 will be in stores on October 12, and you may have noticed a spate of exclusive previews online recently.

Bleeding Cool ran an exclusive of the JH Williams III pages from the issue and Rich Johnston spoke with CBLDF Executive Director Charles Brownstein, who described why the CBLDF continues to be relevant and the importance of the Canada Customs Case:

Defending this case isn’t about defending the rights of pedophiles, it’s about defending readers and artists against unreasonable searches and prosecution for the art they read and make.  That’s not an area where you want to take the authorities on their word, that’s where one has an obligation to fight, because if you don’t you can lose a lot of the advances you’ve made.

I think the slippery slope argument applies more than ever as we get into the area of United States citizens being prosecuted for what they read, whether it’s books in their own homes or files on their devices.  For instance, there’s an entire generation who grew up reading manga in bookstores who are currently in college.  If they still enjoy the art form, chances are they have a bunch of it on the same electronic devices that they have their school materials on, and chances are a lot of it is untranslated, uncensored, and not at all different from the material at issue in the Canada Customs case.  Those kids are at risk when they cross a border to go to a party or visit a friend, and they don’t even know it.  That’s just one reason why this case is important.

Bob Schreck, Editor in Chief for Legendary Comics and editor of this year’s Liberty Annual, also took the time to answer a few questions about the book. Schreck talked about Matt Wagner’s contribution with Alex Zalben at MTV Geek, which also ran exclusive images of Wagner’s brand new Grendel story. 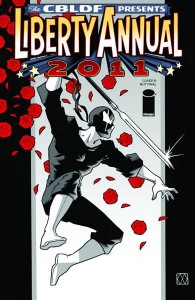 Schreck also spoke with Laura Hudson at Comics Alliance, describing what he thinks is the greatest threat to free speech in comics:

Comics. Their very nature is their weakness. It’s my opinion that comics can’t get away with as much as film, television, novels or the internet can. A comics page stays right where it is — for all to see. For a parent to see and wonder… how long is their child is staring at whatever image that they might deem “harmful.” Whereas a motion picture makes its offense and [then] the image or word is gone from view or earshot in mere seconds and swept away. A film is a more communal experience that a parent can guide a child through. A book is just words on paper and it takes a lot of hard work to stay on top of the medium, and the internet is easily controlled (or so they’re told), and access can be limited…

I can’t begin to tell you how many young kids I know that have been allowed to see R-rated films by the most protective parents, but having realized that they may have made a “mistake” in judgment, the parents don’t go charging off to the garage looking for their pitchfork to storm the movie studios. Besides, the studios have a lot more cash to fight and win any lawsuits that may come their way. Despite all the acceptance of modern pop culture, in many areas of society, comics unfairly still have the stink of the 1950s on them and are regarded to some degree as entertainment for simpletons. It’s a stigma that still shows up in a lot of the work the CBLDF has to fight.

With the interview, Comics Alliance ran an exclusive preview of J. Michael Straczynski and Kevin Sacco’s story, “Separation of Church and State.”

In his in-depth interview with TJ Dietsch at CBR, Schreck further touched on why comics are targeted with a more specific example:

Some readers might be wondering how bad things really are for creators and other comic book people these days, especially with the Internet essentially allowing anyone to say whatever they want at any time with little repercussion. Schreck sees comics as being unfairly targeted by people due to their physical permanence.

“I think it’s because the Internet is much like a motion picture in some ways,” Schreck said. “Over the years, I have heard several fairly liberal-minded parents, who also happened to be comics-savvy, complain about certain language used in comic books being inappropriate for their younger children. However, almost all admitted that those same children have seen the movie Predator, which has worse language and far worse human carnage than the books they cited. The difference is that the images pass on screen, be it a reel of film at the movies or an image clicked through on the Internet, so it’s not there continually staring the parent in the face as a comic book image does. The Internet and motion pictures are more ephemeral, more transitory in nature. A comic book is there forever.”

Dietsch talked to Schreck about each of the creators he recruited for the Liberty Annual, and CBR also ran an exclusive of the first page from the Jeff Lemire and Mark Waid story from the issue. Schreck describes working with both:

“Having worked with Jeff Lemire at Vertigo and knowing that he would love to lend a helping hand to the cause, he was easy to approach,” Schreck said. “Meanwhile, I’ve also known Mark Waid for years, and while we never had the opportunity to work together, I’ve been a big fan of him and his work, and from our previous conversations was certain that he’d be inclined to help the fund. Just as Mark let me know he was up to the task, Jeff’s writing partner had to bail due to an over abundance of deadlines. So I mentioned to Jeff that Mark was contributing to the book and asked if he would like to work with him. Jeff’s also a huge fan of Mark’s work, so we had a new team.”

Visit each site to get a peek at some of the amazing material Schreck has collected for this year’s CBLDF Liberty Annual 2011. Look for it in stores on October 12, 2011!