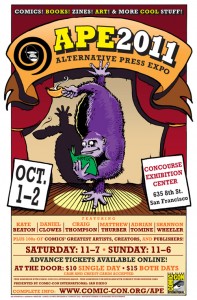 This weekend the Comic Book Legal Defense Fund is exhibiting at table 239 at the Alternative Press Expo in San Francisco, where Craig Thompson will be signing copies of his new graphic novel Habibi to raise money for our important legal work! In addition to Craig’s appearances, the Fund will be offering a wide array of items to thank you for your donations, including graphic novels signed by Charles Burns, Dan Clowes, Guy Davis, Moebius, and Paul Pope. 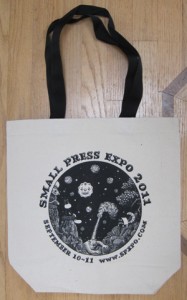 On top of our booth incentives you can also learn more about the CBLDF at our Censorship Then & Now program on Satuday at 11:30, hosted by CBLDF’s Executive Director Charles Brownstein. Brownstein will also be hosting Drawing Inspiration: The Secrets of Comics Creativity with Kate Beaton, Tom Neely, Craig Thompson, Mathew Thurber, Shannon Wheeler on Saturday at 6.

Read on for a full schedule of events including Craig Thompson’s signings for the CBLDF at APE!

Craig Thompson will be signing to benefit CBLDF at APE. CBLDF is requesting a $10 suggested donation for signatures, or that donations be made to pick up one of Craig’s books CBLDF is offering at the show. Sorry, Craig will not be sketching at APE.

Saturday – 11:30 CBLDF: Censorship Then & Now—Earlier this year the Comics Code Authority closed its doors forever, ending an era of self-censorship in which comics were stigmatized in the general culture. Though the threats that brought about the Comics Code are the stuff of history books, real threats to comics are still present in the courts in the United States and abroad. CBLDF executive director Charles Brownstein delivers a gripping history of comics censorship from the ’50s to today and talks about life after the Code.

Saturday – 6:00 Drawing Inspiration: The Secrets of Comics Creativity—Ever wonder where your favorite author or artist gets his or her inspiration? Now you can find out as moderator Charles Brownstein (executive director, CBLDF) joins APE special guests Kate Beaton (Hark! A Vagrant!), Craig Thompson (Habibi), Matthew Thurber (1-800 MICE), and Shannon Wheeler (Oil and Water), plus Tom Neely (The Wolf) for an in-depth discussion of what gets their creative juices flowing and the secrets of what inspires them.