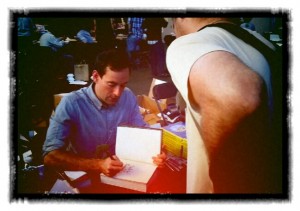 The aisles were packed, as indie comics fans picked up the latest work from their favorite creators and discovered new talents. Special Guest Craig Thompson’s new graphic novel, Habibi, proved to be one of the hits of the show, with vendors around the room running out of copies the first day of the show! Thompson joined CBLDF for three signings, enthusiastically chatting with CBLDF supporters. Delighted fans walked away with gorgeous sketches in their copies of Habibi, Blankets, Carnet de Voyage, and Good-bye Chunky Rice.

CBLDF thanks Thompson for the support he showed the Fund over the course of the weekend. Thanks also go out to CBLDF volunteer Ricardo Gomez.

← Be Counted At APE!
CBLDF Auctions Heat Up →