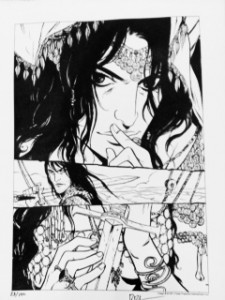 With the announcement during NYCC that Becky Cloonan and Brian Wood would be taking the reins of Conan the Barbarian, CBLDF launched an exclusive letterpress Conan print. Limited to 100 copies, the print features characters from Robert E. Howard’s “Queen of the Black Coast,” which forms the basis of Wood and Cloonan’s first Conan arc. The print is based on the line art of a variant cover and is being used by CBLDF for this exclusive premium item through the gracious cooperation of the Robert E. Howard Estate and Dark Horse Comics. Only a few of the prints remain, and you can get one here! 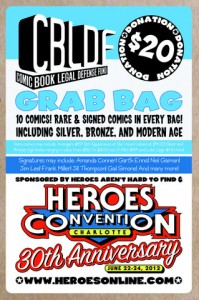 The CBLDF Liberty Annual 2011 debuted last week to rave reviews. If you didn’t have a chance to pick up a copy during NYCC or your local comic shop is sold out, you can get it from CBLDF! We have the John Cassaday and Matt Wagner covers, as well as Frank Quitely’s incentive cover, available here.

CBLDF has other hot items from the NYCC convention floor are now available online, including Mark Twain’s Autobiography, 1910-2010, signed by Michael Kupperman, and Bake Sale, signed by Sara Varon!