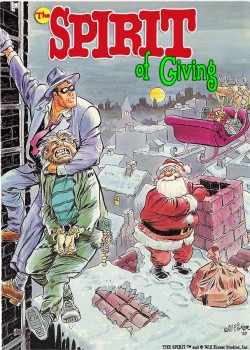 Last holiday season, The Will & Ann Eisner Family Foundation sponsored The Spirit of Giving, a holiday gift drive encouraging membership and donations to CBLDF with incentives that included signed and personalized graphic novels by some of the industry’s greatest creators. Over 450 donations came in over the course of the Spirit of Giving campaign, including more than 200 memberships. All told, the Spirit of Giving drive contributed to raising more than $75,000 for the CBLDF’s important First Amendment program work as we closed 2011, allowing us to pay off all of our 2011 program obligations and enter 2012 with a clean slate.

CBLDF Executive Director Charles Brownstein says, “Everyone on the CBLDF staff and Board of Directors is extremely grateful to the holiday generosity shown by our community of supporters and the Eisner Family Foundation. We’re currently in the midst of some extremely important casework, and this surge of support insures we can enter 2012 in a positive position to perform that work. We’re thankful to everyone who contributed for their extraordinary support.”

Carl Gropper, of the Will & Ann Eisner Family Foundation says, “The CBLDF was important to Will Eisner and its goals are as important today as when it was founded. We must maintain our vigilance over our Constitutionally-granted rights and liberties in order to stop those who would take them away. The Foundation is fortunate to be in a position where it can continue Will Eisner’s good work.”