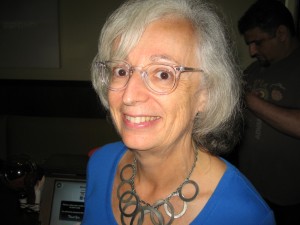 Lawyers too often get a bum rap. Even Shakespeare couldn’t help himself from dumping on lawyers with his imminently quotable quip, “The first thing we do, let’s kill all the lawyers.”  But that’s really not fair. A good many lawyers work selflessly and passionately to advance the greater good. Louise Nemschoff is most certainly among them.

A long-serving member of CBLDF’s Board of Directors, Louise retired from the board last summer. Throughout her tenure on the board, Nemschoff worked tirelessly to help creators whose rights came under threat. If you ever approached the CBLDF with a trademark, copyright, or entertainment law concern, Nemschoff was probably the person who helped you with the answers you needed.

After a few well deserved months off from CBLDF duty, we caught up with Louise to get her perspectives on the Fund, the First Amendment, and the challenges cartoonists will be facing in the new world of digital media for this installment of The Good Fighters.

CBLDF: How did you find out about the CBLDF and why did you decide to become a board member?

Louise Nemschoff: I first found out about the CBLDF when I was on a panel at Comic-Con with another attorney, who was very active in the Fund and I think had been involved in its original creation out of North Hampton, Massachusetts.

I became a board member because I believed in the mission of the organization. I’ve been a long-time supporter of First Amendment rights and I wanted to contribute something to the industry where I was representing clients. and continue to represent clients.

CBLDF: While you were a board member, was there a case that CBLDF took on that you found most important to you personally? If so, why?

LN: Probably the case that was most important to me personally was the Mavrides case, which involved attempts by the California State Board of Equalization to collect sales and use tax on a comic book artists’ royalties. They were trying to collect on comic book artists who submitted their work in the form of hand-drawn comic book pages, which were then photographed and turned into a plate for printing. At the same time, they did not charge sales tax for authors who submitted written manuscript nor did they make those charges for comic book artists who submitted their work in digital form, which in those days was considerably less common. We ended up convincing the State Board of Equalization that it was indeed inappropriate to charge sales tax on one form of expression and not another. The Fund secured the support of the newspaper cartoonists association as well, and eventually the State Board of Equalization changed their rules on the subject. So, it was a really important case that has real financial implications for comic book creators.

CBLDF: Has the First Amendment played a role in your work as a lawyer? If so, what role has it played?

LN: As an entertainment lawyer, First Amendment issues come up all the time, mostly in the context of determining whether or not a work is defamatory, whether or not a creator can do a parody or a satire, and in terms of clearance issues for documentaries and the fair use doctrine, which is at least related in part to the First Amendment. The idea of the fair use doctrine is that there are some things that, even though they are protected by copyright, other people ought to be able to use in certain ways in order to participate in the ongoing marketplace of ideas and development of the culture. That’s the context that the First Amendment impacts on my practice.

CBLDF: You’ve spoken about electronic media at several conventions and meetings. What kind of challenges do you foresee for comic books as publishers and creators start moving into the digital medium?

There’s also a problem for comic books in terms of how you translate the formatting from the traditional comic book-sized page to the computer screen. A lot of that may be solved, at least to some degree, through the use of tablets because they are closer in size and can fit the vertical, rectangular shape of comics more easily. But there are also challenges in translating comics to the mobile format: Are you going panel by panel? How do you go from one panel to another?

I think the industry as a whole needs to figure out a way to avoid what the music business did  — by trying to maintain their old economic models for as long as possible — and to embrace the new media, figure out ways to make content available, and make money off of it.

I think censorship is also a potential challenge for digital media because, as we know, there are a number of countries that filter and block websites for political and other reasons. I can very easily see a temptation among some parties to block websites and block content. For example, sexual content. That has been tried in the past, and the result was that they ended up blocking all the websites providing information on breast cancer, which was not what anyone intended. There would be a lot of unintended consequences if we started restricting access to websites and filtering or blocking websites based on their content.

I have to say: Piracy is also a problem. You want to make sure creators get paid for their work. I represent a number of independent comic book and graphic novel publishers, artists, and writers, and I admire them so much for what they have to do just to tell their stories. It has always been hard to make a living from comics, even before the specter of digital piracy. To the extent that piracy supplants authorized avenues of distribution, it makes it harder for independent creators and publishers to survive. That, in turn, makes publishers less likely to take chances on material that is out of the mainstream, and it reduces the opportunities for a variety of different voices to be heard.

We have to find a way for creators to earn a living from their creative work in the face of rampant piracy.  However, I do have concerns that if there’s a method for blocking pirate websites, there will be a temptation to use that to attempt to block websites that have content that is considered inappropriate for children or content that some people just find offensive. We’ve certainly seen this with other attempts at censoring the Internet, earlier attempts, some of which the Fund filed amicus briefs about.

LN: At the time the First Amendment was adopted, there was no recorded music, there was no photography, there were no motion pictures, there was no television, there were no video recorders, and there were no digital media. I think the courts at least have managed to acknowledge that the First Amendment, free speech rights, apply to all of these media, straight through to the most recent decision, Brown v. EMA, which acknowledged First Amendment rights for video games. CBLDF filed a really excellent amicus brief in the case by our counsel, Bob Corn-Revere, that traced the past attempts to censor comics and showed the parallels to what the California law was trying to do to censor video games. I think the legal system, when presented with those issues, so far has kept up with the technology, but each new technology raises opportunities for people to try to restrict free speech in new media. And we constantly have to fight them.

CBLDF: How do you think the perception of comics and comic book creators has changed over the years, in particular during your tenure as a CBLDF board member?

LN: For a long time comics were — and to some extent still are — viewed as a medium for children, and that has led to a lot of efforts to try to limit the kinds of speech that can be presented in the comics medium. I think that kind of situation has improved over the course of my tenure on the board. Now, we have and can point to really phenomenal classic works of literature that were done in the comics medium, like Maus and Blankets and many, many others that are outside the traditional superhero or comedy format. It’s something that the CBLDF still has to fight against, this misperception. That’s one of the areas in which the CBLDF often provides assistance in cases, identifying expert witnesses who can speak to the substance of the comic medium.

Another big trend that I see is a greater recognition of comic books as an efficient form of research and development for film, TV, video games, and other media. Not to say that everyone is using that resource wisely, but it is now well recognized that comic book creators are creating archetypal stories that do well not only in the comics medium, but in other media. And I think that really has become more prevalent over the time I have been on the board.

LN: To some extent, it’s partly the result of our success – we’ve demonstrated the limits on attempts to censor and go after the publishers and go after the retailers. Now the censors are left with: Who else is there? Well, the people who read comic books. It seems to me that the First Amendment not only is a right to speak, it’s a right to hear different ideas. The marketplace of ideas is one where people can express their views, but the purpose of expressing their views is for them to be aired in the public, to be discussed, listened to, heard, criticized, critiqued, and accepted, or rejected. I think it includes a freedom to read as well as a freedom to speak.

Part of it is because there’s been an increasing effort to criminalize drawn images of children in a sexual context. Child pornography laws originally were created to prevent physical abuse of children, to prevent people from taking photographs of children in suggestive or sexual activities and then commercialize them, sell them, share them, indulge their prurient interest. Lately, there has been a tremendous attempt to apply that to manga and drawn images, even though no children were hurt or even used in the creation of those works.

CBLDF: If you were to give a message to people about why they should support CBLDF, what would it be?

LN: The next voice that may be silenced may be your own. If we don’t protect unpopular ideas, really all of us are fair game, all of us are at risk, even the people who read the books. Readers, creators, publishers, retailers — anyone who has any connection to the business — should be a staunch supporter of the Fund and helping preserve the right to free expression and the marketplace of ideas.