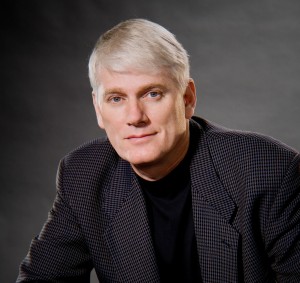 In 1986 — the same year CBLDF was established — Mike Richardson founded Dark Horse Comics, which has since grown into one of the largest and most influential comics publishers in the world. From Aliens to Hellboy to Sin City and more, Dark Horse has released some of the most beloved — and occasionally controversial — books in comics.

Inexorably energetic, Richardson isn’t content to only preside over a comics publishing company. He writes, produces films, and owns popular comics retailer Things From Another World. Towering close to seven feet tall, Richardson exudes the same aura held by some of the superheroes found in the books he publishes. But his heroism is all too real: He is one of CBLDF’s most devout supporters.

In celebrating more than 25 years of both the CBLDF and Dark Horse Comics, CBLDF Executive Director Charles Brownstein sat down with Richardson to talk about censorship and his experience as a publisher for this edition of The Good Fighters.

CBLDF: Talk a bit about some of the risks Dark Horse has had to take, specifically with an eye to expression issues. When you were publishing Sin City, which people don’t really bat an eyelash about, you took a big chance asking retailers to buy into a book that had depictions of nudity, sexuality, and violence. As a publisher, what are your attitudes toward taking chances on material that could land a retailer in legal trouble? Or even yourself?

Well, I think that when you look at material — and some of it might be edgy — if the work is valuable, if a statement is being made and it is crucial to the work, we will go ahead with it. Aside from something like Sin City, we’ve published many controversial properties over the years. I think the biggest issue is to make retailers fully aware of what they are purchasing and to package it properly so it doesn’t look like what people would say are “kids comics.” A lot of times the packaging and format disguise the content inside. We have meetings about every book we do. We talk about format and what the cover is so when we do have material that would likely be considered offensive, we package it carefully. That way, retailers aren’t surprised by the material inside the book.

CBLDF: How do you feel the climate towards edgy material in comics has changed over the course of your publishing run?

The climate has changed in a way because the readers are older. Studies have shown that the average comic reader is more likely to be 25, not 12. So, material has naturally evolved to be aimed toward an older audience. Superheroes are often aimed at an older audience because it is a different culture than it was before. I cannot imagine my father sitting down and collecting comics after he got home from work back in the 50s and 60s. The culture has changed so now you get a 40- or 50-year-old man who plays video games, goes to movies… it’s a very different world.

We have opportunistic public officials that see comics as easy targets and that they can get some headlines by going after a comic shop they feel is selling material inappropriately. Or you still have a segment of the population that thinks that comics are intended only for children. I think that is less and less true as time moves on.

CBLDF: What kind of commitment does Dark Horse make to ensure the free expression of its creators?

As a publisher, I think that I’ve always been open to whatever served a story. We enter into agreements with creators, giving them the ability to create the work as they see fit. Often I’ve entered into a deal and the work that comes out is much harsher than even I am comfortable with. But the idea is that once I decide to publish, if we’re standing up for creators and if we’re saying that Dark Horse will stand behind you and your work, we’ll move forward with the project.

I am not a fan of censorship, particularly from outside our company. I educate myself enough about a creator to know what directions the creator might take. Once we’re publishing and the creator moves in a certain direction, I feel like we’ve made the commitment to see that work through. Sometimes it has been uncomfortable, but that’s a commitment we make to creator rights.

CBLDF: How have you personally dealt with the material that makes you uncomfortable?

Obviously, there are certain things that I wouldn’t go near or would stop. In that case we would give the project back to the creator, and they could find another publisher.

CBLDF: The history of publishing is filled with publishers placed in the position where they’ve got to go to court to defend their principles, for example, as happened during the Tropic of Cancer cases. What kind of content would you be passionate enough about to personally fight for? What would it take to put yourself out into that arena, to stand up for your beliefs?

I’ve said it many times that there are not separate rules for the publication of comics. The First Amendment does not exclude comics from its coverage. I feel confident that anything that we publish, if we took it as far as we had to, we would end up being triumphant in any kind of case involving content. Again, the right to free speech and creative expression is something that is accepted in other areas of entertainment. Why do people want to put comics in some other category?

We have every right to the same freedom of creative expression as any other form of entertainment. What we have left to deal with are some people who try to say comics were created for six-year-olds. Well, very few six-year-olds read comics, and they read the comics they’re supposed to read.

I can remember a time when I was being interviewed by one of the cable networks. We thought the interview was about the opening of one of our retail stores in Los Angeles. They thought they would surprise me. When the interview began, the interviewer held up a copy of Aliens and asked “How could you justify selling this to a six-, eight-year-old kid?” I said “Are you crazy? I would never sell this to eight-year-old kids. Did you see the movie? It’s not intended for kids, and neither is the comic.”

It’s very clear that the comic is based on the movie. We have a copy of the book that looks like it has an H.R. Geiger cover, and I’d never let my children read it. The interviewer then asked whether I think somebody should be overseeing this. And I said yes. I do for my house, and I think every parent should be looking over their children’s shoulders to see what they’re reading. In my house I know what my kids read.

The Constitution forbids people from going into my house and telling us what we can and can’t read. People have their perceptions of comics, and these perceptions often color their judgment when dealing with the censorship and content of comics. It’s really no different from any other creative expression.

← CBLDF Kicks Off The Convention Year At Amazing Arizona Comic Con!
SPIRIT OF GIVING Helps Raise Over $75,000 For CBLDF! →