I was extremely excited to represent the CBLDF at the ComicsPRO Annual Meeting in Dallas last weekend. This event is filled with meetings between publishers, distributors, and some of the best comic stores on the planet. The brainstorming, planning, and discussion that takes place over a short 48 hours makes it easily one of the best weekends of the year. Thanks to the generosity of the business community at the show, we were able to raise $8,000 for our important work, making ComicPRO one of the of our most productive and appreciated events, as well.

The main event of the meeting were the roundtable sessions, where we got to hear feedback from our retail members and chat with them face-to-face. We did a lot to collaborate on and discuss what the CBLDF is up to in 2012. A big topic in those conversations was the launch of our “Member Appreciation Party” program for stores (as discussed here).

The huge highlight of the weekend was the first-ever ComicsPRO Live CBLDF Benefit Auction. That was a huge success, and an enormous amount of fun. Almost every attending store came out in support, and while I went to Texas already respecting and admiring Comic Shop Retailers, I came home completely in love. This is a great group of people.

The auction was hosted by IDW Publishing‘s Marketing Guru, Dirk Wood, who kept things light, and everyone laughing. It included pieces of gorgeous original comic art (donated by our awesome Artist Members), signed books, and some classic fanzines from the the early 1960s. On top of these items, several of our publishing partners graciously donated ad space. Dynamite, Diamond Comics, the newly reformed Valiant, and Dark Horse Comics all surprised the crowd with these unannounced auctions as the night went on. 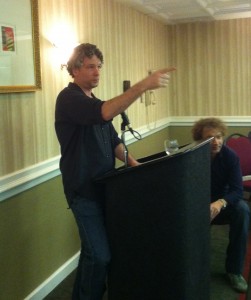 Special guest auctioneers were introduced throughout the night, including Diamond Comics’ (and CBLDF Board Member) Chris Powell, Dynamite’s Nick Barrucci, Steve Rotterdam of the Bonfire Agency (the amazing group that designed our most recent ad campaign), Valiant’s Atom Freeman, and writer/editor Scott Allie, pictured above. These guys are all tremendous supporters of the CBLDF, and I want to thank them for making the night more festive. 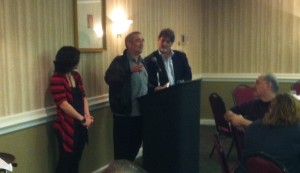 One of the most popular moments of the night (and a personal highlight for me), was when DC Comics’ Senior Vice President of Sales Bob Wayne came to the podium to discuss the historical significance of some ALTER EGO fanzines that were being auctioned. Mr. Wayne was awarded the ComicsPRO 2012 Industry Appreciation Award earlier in the day, and few other folks in this industry are as well-respected, or as involved in comics fandom, retail, and publishing.

Other highlights included Dynamite’s Nick Barrucci going double-or-nothing and getting two matching bids from the crowd, and the last auction of the night being a surprise hit: Dirk Wood’s one-of-a-kind, dulcet tones recording the message for a store answering machine.

The most recent CBLDF Retail Membership drive, which is solicited through Diamond Previews every Fall, was the largest since the program’s inception. A huge part of that success is due to ComicsPRO reminding their members to join (or re-join) the CBLDF, so we are always very proud to deepen our partnership with that organization. The roots of the Fund lay in protecting a local comic shop, so it is an ongoing concern to work with our retail members, hoping that they will never need the CBLDF, but ready to help them if they do. In a very real way, comic stores are the front line of the Free Expression battle, and understand the need to make sure they can sell the comics they choose to sell, without legal consequence. Comic Retailers are at the heart of comic books, and the CBLDF, and we need them, and more of them, more than ever. 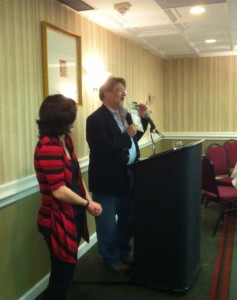 At the end of the weekend, when the dust had settled and the fog had cleared, the attending members of ComicsPRO had contributed over $8,000 dollars for the Comic Book Legal Defense Fund, and plans were made for many more fundraisers nationwide. This show of support from the cream of the comic retail crop was a great way to start the year, and I look forward to many more years of auctions and great weekends, but most importantly, more years of partnership and growth between the CBLDF and the dierct sales market.

Thanks to all the retailers and publishers who donated last weekend. See you in twelve months!

(Special thanks to Amanda Emmert (Muse Comics, ComicsPRO), for setting up the weekend and the auction, and Jeremy Atkins (Dark Horse) for last minute logistics assist)