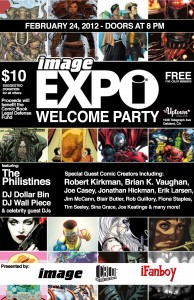 Experience Creativity with comics’ greatest creators at the Image Expo Welcome Party sponsored by Image Comics and iFanboy to benefit the Comic Book Legal Defense Fund! The party is free for CBLDF members and kicks off at 8 PM on February 24, 2012 at The Uptown in Oakland, California. This party jump starts a weekend of celebrating independent comics and free speech at the Image Expo, taking place at the Oakland Convention Center. Proceeds from the Image Expo Welcome Party will benefit the Comic Book Legal Defense Fund, who will have a gift bag for members and donors!

“The way Downtown Oakland has transformed itself over the last couple years is really inspiring, and I have a lot of admiration for all the people who made that happen,” said Image Comics publisher Eric Stephenson. “Being able to involve Image in an event that takes place within such a vibrant community feels really good.”

CBLDF Executive Director Charles Brownstein said, “The Bay Area is an incredible creative place, and we’re thrilled to be working with Image and iFanboy to make this killer celebration of art and music that thanks our members for supporting our important work! I can’t wait to meet everyone who comes out!”

The party will also which will feature a musical performance by The Philistines, as well as music from DJs Dollar Bin and Wall Piece and some special celebrity guest DJs.

“We’re super excited to be teaming up with Image Comics and the CBLDF for this event,” said iFanboy co-founder Ron Richards. “There’s nothing better than celebrating comics and rocking out on the eve of a great convention like Image Expo!”

ABOUT iFANBOY
iFanboy is one of the leading online comic websites for news, reviews and a vibrant community. Founded in 2001, iFanboy has become one of the most respected and valued sites in the comics media.  Home to the #1 audio and video podcasts about comics, iFanboy is known for it’s personal connection, bringing it’s audience deeper into comics than any other media property. iFanboy is owned by Graphicly, one of the most innovative sources for digital comics and digital publishing distribution. For more information, visit www.ifanboy.com