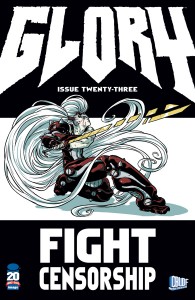 This weekend, the CBLDF will be exhibiting at Image Expo — a celebration of creator-owned comics honoring the 20th Anniversary of Image Comics — at the Oakland Convention Center in downtown Oakland, California, February 24 – 26.

I’ll be there representing the organization at booth 75 all weekend and giving a presentation about the history of comics censorship on Sunday. Betsy Gomez is joining me there — she does all the hard work of editing this website and is looking for new writers to help us make it even better, so writers, please take notice! We’ll have special giveaways for our members, a party on Friday night that’s also free to members, and lots of great incentives to thank you for supporting the Fund’s important work. Please come out and say hi — we love to meet our members!

We’ll also have the extremely popular CBLDF Grab Bag, sponsored by HeroesCon, which boasts several signed and rare books in each bag. There’s still an Avengers #57, a Nick Fury #1, and some other killer rare comics floating around in these. Every single grab bag also has at least three autographed comics from folks like Amanda Conner, Garth Ennis, Neil Gaiman, Rob Liefeld, Jim Lee, Frank Miller, Jill Thompson, Robert Kirkman, Gail Simone, and lots of other great creators. CBLDF Grab Bags are available at the show for a donation of $20 each, or three for a $50 donation.

Last week we announced that we’re giving away copies of a CBLDF exclusive cover of Glory #23 to our members. All you need to do to get your copy is come by the CBLDF booth #75 at Image Expo with your current year CBLDF Membership card, and we’ll give you this CBLDF Image Expo exclusive copy of Glory #23 to thank you for your support! The current year card features CBLDF’s Lady Liberty mascot by Cliff Chiang. Or, if you joined after February 24, 2011, your membership is still valid, and we’ll accept the 2011 member card featuring Green Lantern. Not a member? Not a problem! Just sign up online before Image Expo and bring a print out of your receipt, or renew at the convention!

Friday night we’re hosting a party with Image and iFanboy that’s also free for members, with a suggested $10 donation at the door for non-members. Many of the superstar creators appearing at the Image Expo will be in attendance for the party, including: Robert Kirkman, Brian K. Vaughan, Joe Casey, Jonathan Hickman, Erik Larsen, Jim McCann, Blair Butler, Rob Guillory, Fiona Staples, Tim Seeley, Sina Grace, and Joe Keatinge. The party will also feature a musical performance by The Philistines, as well as music from DJ Dollar Bin, DJ Wall Piece, and some special celebrity guest DJs. This happens Friday at 8:00 p.m. at The Uptown — 1928 Telegraph Avenue, Oakland, CA 94612.

On Sunday, I’m giving a talk on the history of comics censorship. Here’s the info:

2 p.m. – 3 p.m., WORKSHOP ROOM B
CBLDF: The History (and Future) of Comics Censorship
Learn the shocking history of comics censorship and how even today comics and the people who make, sell and read them are still threatened. CBLDF Executive Director Charles Brownstein tells the sordid tale, from the public book burnings and Senate hearings that led to the Comics Code Authority in the 1950s through the attacks on retailers in the 1980s, artists in the 1990s, and readers today that the CBLDF is working to combat!

Image is a great partner to the CBLDF, and their work, including the CBLDF Liberty Annual, has raised nearly $100,000 for our important work over the years. We’re grateful to them for their support and look forward to raising a salute to them at Image Expo.

I hope you come out to meet the huge roster of great creators at the show and that you make a point of coming by the CBLDF booth to say hello! See you at Image Expo!