Last weekend the CBLDF was in Oakland, CA exhibiting at Image Expo, a celebration of creator-owned comics commemorating the 20th anniversary of Image Comics. CBLDF.org editor Betsy Gomez and I were there representing the Fund, and we got to meet a lot of our members and supporters, who generously contributed more than $4,000 to our important legal work over the course of the weekend.

The festivities kicked off on Friday night with a member appreciation party at The Uptown, a terrific concert venue in downtown Oakland. Co-organized by Image Comics and iFanboy, the party was a crowded who’s-who of comic book royalty. Virtually every creator from the convention showed up, including Image partners Robert Kirkman, Erik Larsen, Marc Silvestri, and Jim Valentino. Other creators at the party included Ed Brubaker, Blair Butler, Bryan JL Glass, Sina Grace, Jonathan Hickman, Joe Keatinge, John Layman, Rob Liefeld, Derek McCulloch, Ryan Ottley, Fiona Staples, Steven T. Seagle, Richard Starkings, Brian K. Vaughan, Matt Wagner, Jim Zubkavich, and many, many more. Even though those are all velvet rope names, this wasn’t that kind of affair — the pros and the fans were happily rubbing shoulders and sharing conversation all through the night. 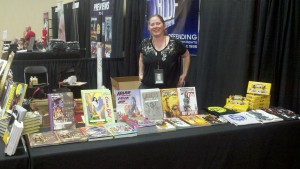 The party wasn’t the only member appreciation item on the agenda — on the show floor we were giving away copies of a CBLDF exclusive cover of Glory #23, generously provided by Image Comics. Glory writer Joe Keatinge was positioned directly across from our table, so our members were able to get this special book signed straightaway.

On Sunday, I gave a presentation on the history of comics censorship that was well attended. The audience that turned out had clever questions, and we got to talk about new censorship trends, such as those affecting readers and travelers raised in the Brandon X case. We also discussed the First Amendment issues raised by Susie Cagle’s arrests while covering the Occupy protests in Oakland. This was a smart crowd.

In addition to meeting so many of our members, it was great to thank the industry professionals that have made a difference towards advancing the CBLDF’s work, most especially Image publisher Eric Stephenson, who spent some time with me cooking up member appreciation plans for CBLDF members during Emerald City Comicon and Free Comic Book Day.

Image Expo was an intimate, comics-focused show that provided unparalleled access to creators. There was a lot of uncertainty for exhibitors going into the show about what to expect, but in the end, it turned out to be a positive event. We found that the show attracted the most dedicated comic book fans in the region, including a lot of folks we’re used to seeing at WonderCon and APE. The show floor didn’t have any of the big booths, loud displays, or cosplay that one has come to expect from comics conventions, but that turned out to be refreshing. Instead, it was booth after booth after booth of creators who spent the whole weekend spending quality time with their fans. Our fundraising was on par with other large regional shows, which is impressive because this was a debut event, because the attendance was modest, and because the window between announcement and execution was extremely short. In the end, the con was a success, and there’s room to grow if Image decides to continue hosting these kinds of events.

We’re grateful to the team putting on the show for contributing our space; to the Image office; to iFanboy and The Uptown for putting together a stellar party; to Eric Stephenson, Joe Keatinge, Ross Campbell and Rob Liefeld for creating the member appreciation edition of Glory #23; and to all our members and donors who made this weekend a success.

The next event for the CBLDF is WonderCon in Anaheim, CA, where I’ll be leading a presentation on comics censorship and a live art jam, and where we’ll have at least two member appreciation giveaways. Both Deputy Director Alex Cox and I will be there, and I hope we get to meet you!

Charles Brownstein is the Executive Director of the CBLDF. Branwyn Bigglestone contributed photography to this article.