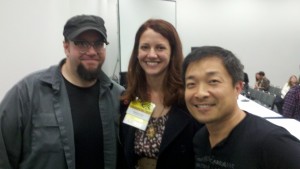 Last weekend big crowds mobbed the Anaheim Convention Center for WonderCon, the long-running California show that’s become a favorite on the comics convention circuit. This year’s event marked the first time the con was held in Southern California after years as a mainstay of the Bay Area comics culture, but the new market didn’t diminish the crowds or excitement of the show. Attendance was extremely strong throughout the con’s three days. CBLDF Deputy Director Alex Cox and I were there representing the Fund, and there wasn’t a moment that we weren’t busy. At the end of the weekend, contributions to CBLDF exceeded $12,500, making it our most successful showing at WonderCon in years.

Alex ran our booth, which was situated close to the main entrance and jam packed with signed comics and graphic novels. We thanked our members with a choice between a free copy of the CBLDF exclusive cover editions of Glory #23, signed by Joe Keatinge, or CBLDF Liberty Annual 2011 signed by Frank Quitely. We also debuted new member buttons and the Comics Code Authority Seal of Approval t-shirt from Graphitti Designs. Look for the t-shirts to hit our Rewards Zone online after the spring cons.

We were assisted at the booth by Jeremy Atkins from Dark Horse, Atom! Freeman from Valiant, and Thomas Gaul from Corner Store Comics and Beach Ball Comics, who filled in over the course of the weekend. Jeremy and Atom! are heavy hitters in comics publicity, and Thomas is an extremely good retailer who just took a position on the board of ComicsPro. The fact that they’d give their time to helping us at the booth underscores how much CBLDF is a team effort and how lucky we are to have such great volunteers on that team.

I gave two presentations during the show. First up was Friday’s “CBLDF: History of Comics Censorship.” This was the first time I got to speak about the full details of the Ryan Matheson case during the history talk. The way that program is structured, I can only talk about a few of our biggest cases, so this new case followed shortly after presenting the Mike Diana one. The distressing echoes between the two cases hadn’t hit me before. Diana’s case was the first time an artist was convicted of making obscene comics. He was targeted because authorities thought he looked like a suspect they were chasing in an unrelated investigation. When it turned out otherwise, the authorities decided that they didn’t like the content of Mike’s comics, and arrested him in a sting operation. Mike’s case ended with a conviction and a sentence that prohibited him from drawing in his own home, cutting off his ability to pursue his livelihood.

Ryan is one of the first readers to be targeted by the legal system solely because of the comics he reads. He was randomly and wrongly searched, subjected to abuse by the authorities, and prohibited from using the tools of his trade while his case worked its way through the legal system. It was chilling to consider that, almost 20 years after Mike Diana, these kinds of cases not only can still occur but do still occur. It underscores the need for constant vigilance.

On Saturday I led the “CBLDF Live Art Jam” with Jim Lee, Rebekah Isaacs, and Eric Powell, who made live drawings projected onto a big screen in front of a full house. It was terrific to see these talented representatives of three generations of creators at the top of their game, and to hear them give their perspectives on creativity, art school, censorship, creative shortcomings, and personal satisfaction. My favorite part was hearing Jim Lee’s short history of deadline excuses freelancers use and how the 21st Century has rendered many of the best ones from the old days obsolete. Hosting these events is one of my favorite parts of what I do, and I’m grateful to the artists for participating and for the audience who came out, asked good questions, and bid generously during the auction portion to support our work. The Live Art Jam accounted for more than $2,100 of CBLDF’s donations at WonderCon.

Back at the booth, Alex arranged for Eric Canete, Rebekah Isaacs, and Fiona Staples to sign for our supporters. Larry Marder showed he’s not just the CBLDF President, but he’s also a supporter by doing sketches for our members on Saturday. The lines for all of these signings were strong, and Fiona’s line was incredible. Folks were very enthusiastic about Saga, and she did a lot of sketches of characters from the book. I was very happy to see the hard work she put into that comic pay off with such a solid show of fan interest here. Alex and I are grateful to Eric, Rebekah, Fiona and Larry for donating their time and talent to the cause.

When I wasn’t running our panels, I was at the booth talking to our members and supporters, which was a lot of fun. Most of the supporters who came by were on top of the news that we’d just seen a win in the Matheson case and wanted to do their part towards helping us raise money to offset his legal debt. I also talked to a lot of new people who’d never been to a comic con before but were excited to be there. This year, I’ve been meeting a lot more of these folks, who tend to be fans of comics-oriented TV like Big Bang Theory and The Walking Dead and who are exploring comics at these conventions. For them, going to a comic con is as cool as attending a rock concert or a playoff game. That’s a welcome trend, and it’s good to see that many of those folks are supportive of our important work when we introduce them to it at our booth.

On the whole, WonderCon was a great show, especially for the fans. Some of the exhibitors and creators I talked to were grumbling about the needlessly long lines for scarce concessions at the convention center and the nightlife in Anaheim being inferior to San Francisco. While that’s all true, I can only shrug about those kinds of problems. In the final analysis, conventions are all about the fans, and WonderCon did right by them.

The exhibit floor hit every corner of the comics universe. DC, IDW, Boom!, Archaia, Aspen, and Avatar all brought big show presentations, and the interactive promotional displays Marvel and HBO brought for upcoming media releases were well liked. There was a credible small press area that included displays from Tugboat Press, Wuvable Oaf/Goteblud Comics, and Tiny Kitten Teeth, among others. The Artists Alley was first rate, and included talents from across the creative spectrum, including Anina Bennett and Paul Guinan, Chynna Clugston-Flores, Renee De Liz, Ale Garza, Michael Golden, Tom Hodges, Keith Knight, Carol Lay, Ted McKeever, Mike Mignola, Dustin Nguyen, Whilce Portacio, Scott Snyder, Eric Shanower, Marv Wolfman, and a great many others. There was also a strong range of fine art displays from Olivia, William Stout, Camilla d’Errico, Flesk Books, and others. The dealers were diverse and ran the gamut from white box warriors slinging rare back issues, including a heavier than normal mix of dealers offering old undergrounds and independent comics, to a big range of vendors selling high quality anime culture merch; comics culture t-shirt suppliers Graphitti Designs and Stylin Online; game companies like Cryptozoic, Capcom, and Nintendo; and rare and foreign book vendors including Bud Plant, Stuart Ng, and Animebooks.com; plus plenty more I probably didn’t have enough floor time to register. There was even a pretty good red shirt alley where Peter Mayhew, Lou Ferrigno, Cassandra Petersen, Ray Park, and others were signing, as well as a gaming area.

I didn’t see any of the programming other than the panels I ran, but if you’re reading this, then you probably read the same articles I did about the cool announcements and discussions that happened in the panel rooms. In total, WonderCon was just another illustration of how the staff and volunteers at Comic-Con International do an incredible job of putting on conventions that offer high value to the fans who come to their shows.

I had expected that WonderCon would be good in Anaheim, but this exceeded my expectations by providing a show that was as fun, interesting, and accessible to fans attending their first convention as it was for those attending their 31st one. Image Expo proved that the Bay Area needs a major comics convention, but WonderCon also showed that Southern California has a hunger for a high quality convention experience that’s more easily accessible than the singularity of San Diego Comic-Con. I hope in 2013 that we’re able to see both markets served.

I want to thank the staff and volunteers at Comic-Con International for contributing our space and programming time, the artists and volunteers who participated in our events, and all the generous donors who contributed to our important legal work with their donations at the show.

Next up for me is the Comic New York symposium at Columbia University this weekend, which is free to the public, and next weekend’s Anime Detour in Minneapolis. Alex will be attending Emerald City Comicon in Seattle next weekend, and we’ve got some cool member appreciation rewards and events we’re doing in collaboration with Image Comics that we’ll be announcing later in the week. If you’re in any of those cities, please come on out, we’d love to meet you!