Last weekend I flew to Minneapolis-St. Paul for Anime Detour, one of the Midwest’s longest running and most well organized anime conventions. The con capped its attendance at 5,000 fans who took over the Doubletree in Bloomington, MN with a full slate of programs, screenings, room parties, and a dealer’s room. CBLDF was there for the first time, the result of the gracious invitation of Anime Twin Cities, a community-driven fan organization whose mission emphasizes performing charitable work. For several years they’ve included support for CBLDF among that work, alongside aid for community members in need and raising money for the Red Cross to aid the victims of the Japan earthquake and tsunami. Last fall I ran into Anton Petersen, Detour’s head of guests, at the Minneapolis Indie Xpo, and told him we were looking to become more meaningfully involved in the manga community. Within a few short weeks, he had written on behalf of the con to invite me to come out to the show. Last weekend confirmed that posture of welcoming inclusion wasn’t a one-off gesture, but is at the heart of what the Detour community does.

CBLDF was provided with a spot on the dealer’s room floor, where we distributed information and discussed our casework with the young crowd, most of whom were previously unaware of the CBLDF’s mission. We also hosted local artists who graciously donated their time to do sketches for the Fund.

Here’s Cassandra Butterbaugh and Alexander Fukui.  Alex spent all day Friday, and Cassie came back for most of Saturday, both of them drawing amazing anime chibis to benefit our important work: 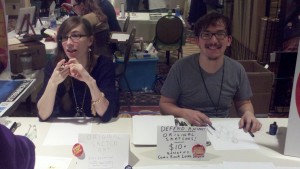 Kierstin LaPatka came by on Saturday, and graciously took time out of her schedule as a paid attendee to contribute her talent to helping us raise money.  I’m very grateful to Kierstin, Cassie and Alex because their presence helped attract even more people to our booth to learn about our important work. 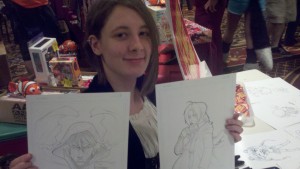 The most important highlight of the convention came on Saturday morning when we delivered a program on comics & manga censorship where Ryan Matheson appeared in public for the first time to talk about his case.  Ryan was joined by guests of honor Greg Ayres, Richard and Shannon Townsend and Kim Pridemore from Studio O-n-Y,  and Frenchy Lunning, editor of Mechademia and an important expert contributor to CBLDF casework.  I opened the program with a short presentation on the history of comics censorship in the United States that covered the 1950s through Ryan’s case.  When Ryan was introduced, the crowd rose to gave him a standing ovation.   He deserved it.

Even though I’ve gotten to know Ryan over the phone since we became active in working on his case last year, this was the first time I got to meet him and his family in person.  They’re all wonderful people who displayed uncommon courage.  On the panel Ryan said, “I knew I didn’t do anything wrong.  They kept trying to get me to take a plea bargain with a short prison sentence, but I couldn’t do it, because I knew there was nothing wrong with what I had.  I grew up with this stuff, and I love it, and I wasn’t going to say that it was wrong to have.  I know I could have lost my life.  I really could have.  I could have gone to jail for a year, and been marked with being guilty of an awful crime.  I was ready to take that risk, because I knew I had to fight for what I believe is right.”

Ryan proved to be as eloquent a speaker as he is a writer, and a passionate advocate for the rights of our community.  I was proud to see him speak out as a free man, and grateful to the generous donors who are helping us raise the funds needed to restore the $45,000 debt Ryan incurred before we became involved with his case.

Here’s a shot of Ryan and I on Sunday.  I’m proud to know this man: 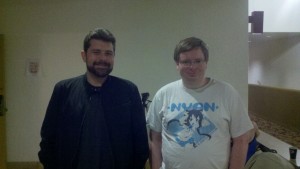 In addition to this being Ryan’s first time speaking out on his case in public, it was also his first ever anime convention.  Afterwards he told me he was overwhelmed by how many people of all ages were into anime and manga, and he was especially inspired by the amount of families involved in fandom.  “This isn’t a fringe,” he said, “these are people from every walk of life.  This is mainstream.”

The family atmosphere is one of the more poignant charms of Detour.  Anton ran his guests department like a committee in charge of a large family reunion.  Adding to this is the fact that his daughter Megan and wife Linda are key members of his multigenerational team.  The various committees who run the show aren’t doing their work with a profit motive, but because they want to put on the best event for their local community.  In a lot of ways, Anime Detour reminded me of the fandom that put together the foundational comic-cons, back before popular demand and scale demanded that the organizers adopt a more professional organization strategy.  It was refreshing to see a con that wasn’t interested in growing to meet demand, but was happy to stay at a manageable size, and to do the most good it could for the community around it.

On Sunday night, Ryan and I were invited out to the staff and guest dinner at a local Mongolian BBQ.  This event encapsulated the overall bonhomie, as 200 staffers and guests took over the restaurant, cheered each other, and raised a toast to each other for a weekend of good, hard work.

Here’s a snap I captured of Anton and Linda: 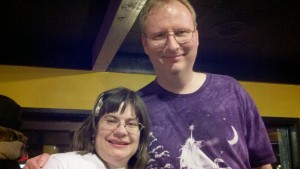 And here’s a picture of Ryan and I with Sarah “Sully” Sullivan, who took time out of her busy schedule working for Funimation to attend the CBLDF’s program on Saturday: 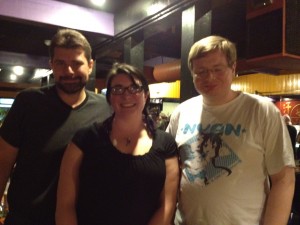 The only sobering downside to Anime Detour is that it underscored that we still have a lot of work left to do in raising awareness within the anime and manga space about the important Free Speech issues at stake.  There’s still a baseline lack of awareness not just about the CBLDF, but also about the dangerous issues still in play regarding the legal climate for manga.  When folks passed my table display that read, “Manga Is Not A Crime,” there was largely a view that it was there as a joke, and the responses I got from people when I explained the issues we’ve battled ranged from shock to apathy to “sucks to be that guy.”  Ryan was absolutely right when he said that the range of people engaging with manga is varied and mainstream.  Unfortunately, as his case proves, the law still views this material as existing largely on the fringe.  It means that the Fund needs to remain resolute in engaging the community in a discussion about their rights to ensure what happened to Ryan doesn’t happen again, and to raise awareness that the CBLDF is ready and willing to respond at the first flash of a First Amendment emergency.  On the whole, Anime Detour was a great first step into the manga world that makes us more determined in our efforts for the long journey ahead.