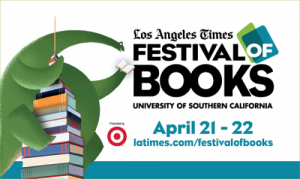 Over the weekend, I had the great pleasure of representing the CBLDF at the LA Times Festival of Books, which was held on the campus of the University of Southern California. It was a gorgeous, breezy weekend, and the crowds were out, raising $3,000 in two short days.

The LAT FoB is a massive affair, taking over the campus of USC like kudzu. The CBLDF was situated in the “Hero Complex” section, alongside folks like Hi De Ho Comics and our friends at ONI Press. The Hero Complex is the realm of journalist Geoff Boucher, and he has built it into a terrific resource for anyone interested in comics and pop culture. The representative tents and panels at the LAT FoB were an extension of that, with programs featuring Jim Lee, Dan Didio, Robert Kirkman, and Ed Brubaker, among others. The quality of panels and speakers rivaled a lot of full-sized comic cons, and when you add the overall programming (Judy Blume, Susan Orlean, Kareem Abdul-Jabbar), you can see how the Festival of Books is an amazing event for book lovers in Southern California.

This was my first trip to Los Angeles, so I took a short detour when I got off the plane, acclimating my brain to freeways rather than subways. My first stop was The Secret Headquarters in Silverlake, a store owned by The Two Daves, gentlemen I have been friends with for some time. Dave Pifer and David Ritchie are card-carrying CBLDF members, and were happy to receive and store several packages for us, so I got a quick tour of their store, as well as their newest venture, right next door, Vacation Vinyl.

The synthesis of Secret Headquarters and Vacation Vinyl is a classic combo. Comics and music have always been linked in my brain; the store that I loved most as a younger man was a combination of comics and vintage records, split by a small ramp between two rooms, one with walls covered in band posters, and the other plastered with mylar-bagged back issues. The similarities between record and comic collecting are deep, with an obsessive love for an art form making them both easy traps for the pop culture minded. Both comics and records are physical objects that can become unavailable and hard-to-find, and they are both mass market pieces of entertainment that transcend the object itself in the hearts of fans. Milk-crate album bins and cardboard back-issue boxes are part and parcel of the same impulse. 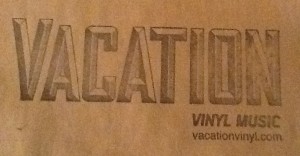 Both stores are beautifully curated, and I was glad they were the first piece of the LA landscape I spent time in.

My next stop was the Hollywood offices of Archaia Entertainment, publishers of now-classics like MOUSE GUARD, ARTESIA, and the newly Eisner-nominated TALE OF SAND. Marketing Manager Mel Caylo was there to greet me, despite suffering from the famous “con crud”; that mysterious illness that lives in convention centers, countless handshakes, and back-issue bins, thriving at comic shows across the country. Archaia has been incredibly generous in their support of the CBLDF, and there will be a few fundraising surprises in the coming months that they were awesome enough to donate.

Saturday morning, the festival began in full swing, at 10 AM sharp, with crowds ready to go as soon as the gates opened. ULTIMATES and OUR LOVE IS REAL author Sam Humphries stopped by to sign copies of his books, and spent some time waxing nostalgic with FRAGGLE ROCK fans, who were happy to have him sign the graphic novel collection he participated in. Sam is one of the CBLDF’s more vocal supporter-creators, and we were happy to host him. 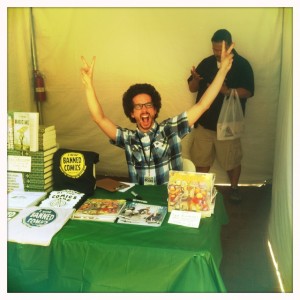 Author Lev Grossman signed in the CBLDF booth on Sunday, giving up a precious stretch between speaking on a panel and heading to the airport, and we definitely appreciate him spending that time with us. Lev has not only written a great deal about comics for TIME Magazine over the years, but his novel THE MAGICIANS is one of the best books I’ve read in the past decade or so. Before he left, he signed a stack of copies of his latest book, THE MAGICIAN KING, which will be put to fundraising use over the next few weeks. (I’m still in the middle of reading it, but so far, it is easily as good as THE MAGICIANS.) 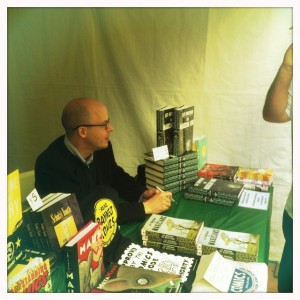 All told, it was an awesome weekend full of comic fans, bibliophiles, and a welcome and surprising number of CBLDF members who came by the booth to say hello. Expect to see many more people wandering through Los Angeles county wearing “I READ BANNED COMICS” shirts after last weekend.

Big thanks to everyone who helped make my life easier over the weekend, of which there are too many to name. But a special shout-out goes to Jim and Terri from the Comic Art Professional Society, who made sure I got a sandwich when the blood sugar was running low. My next stop for the CBLDF is MoCCA in New York City, where I’ll be presenting the CBLDF’s history of comics censorship. Please come by and say hello!