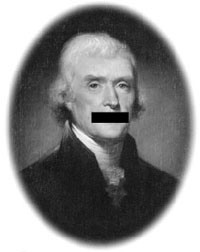 This week, the Thomas Jefferson Center for the Protection of Free Expression announced the Jefferson Muzzles, which “are awarded as a means to draw national attention to abridgments of free speech and press and, at the same time, foster an appreciation for those tenets of the First Amendment.” Among the dubious honorees on the 2012 list are the US State Department for banning the participation of a Palestinian political cartoonist in a conference on free speech and the Salem, Missouri, Public Library Board of Trustees for blocking access to websites related to minority religions.

This is just the tip of the iceberg. The Thomas Jefferson Center gives the awards to ten individuals or organizations, but they start with a very large list of nominees, an indication that Free Speech is still very much at risk. You can read the entire Jefferson Muzzles list here.

Have your say and stop people from being muzzled! Help support CBLDF’s important First Amendment work by making a donation or becoming a member of the CBLDF!

← CBLDF Blows Into The Windy City For C2E2!
Judge Hears Arguments in Case Against Utah Law Restricting Speech on Internet →