The Summer Solstice of the comic fan’s year has come and gone. The maypoles are down, and the blood has been washed from the altars. Comic Con International is over until the earth spins around the sun again.

This was a terrific year at CCI for the Comic Book Legal Defense Fund, with launches of great new products, important programs, and some nose-to-the-grindstone work by some extremely dedicated volunteers. This was an important event, and not only was it a great fundraiser for our ongoing First Amendment work, but it was a vital week of education and outreach.

First and foremost, we hosted Ryan Matheson (formerly known as “Brandon X”), who spoke during a panel about what he went through in the past year as he was falsely accused of transporting child pornography into Canada. Ryan’s case is a perfect storm of institutionalized bullying, xenophobia, and classic censorship tactics. In the end, thanks to the outstanding defense funded by CBLDF, cooler heads prevailed and the Crown dismissed the charges leveled against Matheson. While he was ultimately declared innocent, this was only after $75,000 of legal bills had stacked up, and as part of the CBLDF’s initiative to pay down those fees, Ryan has been traveling with us to various shows, to tell his story. It’s an important and cautionary tale, and manga journalist Deb Aoki live-tweeted the panel here. We want to thank Ryan for joining us in San Diego; the more people that hear is story the better, as what happened to him very truly could have happened to any of us.

In other news, we premiered, with Threadless, the latest in their COMICS ON TEES series, this time written by Neil Gaiman. Rather than describe these awesome shirts, I will simply point you to the link above as all the typing in the world won’t do them justice. These shirts moved like gangbusters, and it was a great launch for a line that will raise money for the CBLDF for years to come! Thanks to Mr. Gaiman, to all the artists involved, and to Lance and the crew at Threadless for helping make these happen!

Our booth stayed busy all weekend, not only with staff and volunteers telling con-goers about the CBLDF, but with several awesome signings! Francesco Francavilla, Raina Telgemeier, and designer Chip Kidd all stopped by to help us raise some dollars, as well as the current crop of writers working on the VALIANT relaunch! Thanks to Duane Swierczynski, Robert Venditti, and Joshua Dysart for hanging out and signing some books for free speech!

It was, as always, an exhausting week. Not only was the show floor extremely busy, but there are several after hours events as well — our annual auction (popular as ever, with help from Things From Another World and Editors Extraordinaire Lauren Sankovitch and Will Dennis), our annual Member Appreciation Party (thanks to Image Comics and Black Phoenix Alchemy Lab!), the Eisners (congrats to everyone who won!), and all the other various and sundry events that pop up as the sun goes down. It really is the greatest week of the comics year in many ways, and even if the evening plans were just walking back to a hotel and poring over all the great comics you found, that entails plenty of calories burned. (For me, it was worth the trip cross-country just to lay hands on the Groo Artists Edition from the amazing Sergio Aragones and our friends at IDW Publishing!)

Aside from the official events, and all of our fundraising, and all of the people who we talked to about the mission, every CCI has a few moments make it more than just a comics convention. Just a few from me:

— Visiting the MTV Geek nerve center and seeing where the magic happens. Those guys have been awesome supporters since they launched, and it’s great that they continue their staunch boosting of the Fund.

— Superstar Volunteer Yesenia Maybee being quoted in the U-T San Diego, and summing up our recent case work more eloquently than I ever could.

— Chatting with Tom “The Comics Reporter” Spurgeon, and watching everyone marvel at his current, healthy physique. 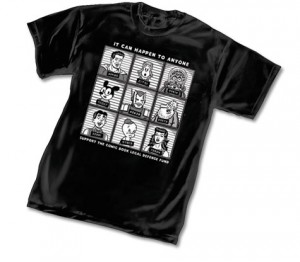 — Seeing people’s reactions to all the new t-shirts, including this one by the great R. Sikoryak.

— Getting daily buttons from the Schulz Museum.

— Heidi MacDonald helping me drape some tables with my arm in a sling.

— Signing up a record number of new members.

— Getting a classic Love and Rockets t-shirt to go with a pile a of new books from Los Bros Hernandez.

— Chatting with all our convention neighbors, including pals from Tope Shelf Comix, DC Comics, Drawn and Quarterly, and Fantagraphics Books.

— And a million more tiny moments that I will remember tomorrow, and then forget again and then remember again in ten years, all from seven days in San Diego that were a non-stop cavalcade of great moments, and important work.

And then the dust cleared and the waves settled, one more Comic Con International had come and gone. The CBLDF raised over $55,700 towards our First Amendment advocacy work, and signed up over 80 new and returning members. Big thanks to Kelly Hudson, Yesenia Maybee, Sophie Phillips-Roberts, Cat Mihos, Drew Johnston, Ang Moeny, Sarah Park, Brian Huberd, and Betsy Rosenblatt. We have great volunteers, and this year was one of the best booth crews we could hope for.

See you after the sun’s next go-round!