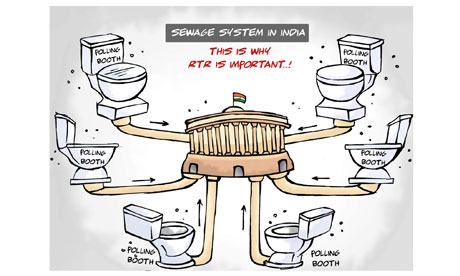 Political cartoonist Aseem Trivedi’s arrest last week on sedition charges stirred up a renewed debate on the freedom of expression in India. The general consensus, even among Trivedi’s detractors, is that Trivedi’s arrest is an abuse of the law. It led to a call for the removal of the sedition law from India’s Penal Code.

In an interview with NPR Trivedi says that he believes the purpose of a cartoonist is to speak out against the suppression of truth and expose the issues and problems in society. He says:

Cartoons like the one shown, which draws an analogy between a sewage system and the political system in India, were used in an anti-corruption movement led by Anna Hazare in December 2011. A lawyer who was offended by the cartoons filed a complaint against Trivedi. This complaint prompted the Mumbai police to arrest Trivedi on sedition charges for insulting national symbols. The High Court in Mumbai called the arrest “frivolous” and a violation of his right to free speech and expression. They have launched an inquiry into how the police applied the sedition charge against Trivedi. They may also create guidelines for applying the sedition law in a manner that is consistent with a 1962 Indian Supreme Court decision that only allows for application of the law if there is a treat of public disorder.

Though he was released on bail last week, Trivedi could be arrested again on sedition charges that were filed in January in the state of Maharashtra. The charges were filed under the Prevention of Insults to National Honor Act, 1971, but the police never arrested Trivedi. State home minister R.R. Patil said that the case is under review, but there is no word yet from the home department on whether they will withdraw the sedition charges. Patil launched a probe of the official who filed the charges in January.

After the firestorm surrounding Trivedi’s arrest, the government is considering an amendment to provisions of Section 124A of the Indian Penal Code. The law makes any words, spoken or written, signs, or visible representations that create “hatred or contempt, or… disaffection towards, the Government established by law in India” punishable by imprisonment and/or fine. The amendment seeks to make a distinction between protests that are anti-government (against the politicians and the ways in which they govern) and anti-state (against the country as a sovereign entity).

Still, there are those who want the sedition law repealed. Section 124A is a remnant of British colonial law. It was used by the British to repress those who fought for India’s independence. Justice Markandey Katju, chairman of the Press Council in India wants to use the Aseem Trivedi case as a test case for repealing the sedition law. He is bringing criminal charges against the police involved with Trivedi’s arrest and against the politicians who brand criticism of the actions as “anti-national.” This show of support is in keeping with Trivedi’s commitment to the fight for free speech and the repeal of the sedition law:

“There are two main points of this battle. One is the fight against Section 124(A) [of the Indian Penal Code] and second is for freedom of speech and expression. It is important that we should be allowed to say what we have to say so that the government hears our voice.”

The Aseem Trivedi case brought a sharp focus to the free of speech movement in India. With people from all sides of the political spectrum united against sedition laws, the time is ripe for India to move toward freedom of expression without restriction.