What does it take to get The New Yorker banned from Facebook, even for a few hours? Apparently a couple of dots. On the front of a pair of female breasts, of course. Specifically, the following cartoon: 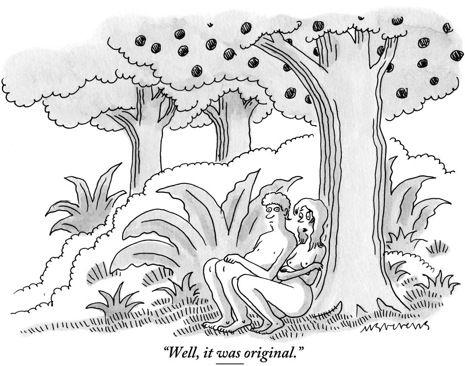 Facebook’s banning policies prohibit both “obvious sexual activity,” and “naked ‘private parts’,” which includes female — but not male — nipples. AsThe New Yorker cartoon editor Robert Mankoff points out, the real offense seems to be that one set of dots are on a cartoon woman, while virtually the same dots are on a cartoon of a man:

“But rather than fight the battle of the bulge, let’s point out, that while female nipple bulging, or F.N.B. for short, is a potentially serious problem, with as yet no known cure, it also has no known victims. That is, unless you count freedom of expression, common sense, and humor.”

Mankoff’s point seems to have stuck with a good many people, as Facebook eventually reversed their position:

“When something is as ridiculous as the misguided Facebook guidelines, the most effective remedy is ridicule,” Mankoff tells Comic Riffs. “Huge organizations such as Facebook are deaf to argumentation but derisive laughter makes their ears perk up.”

Facebook has re-enabled The New Yorker’s account, permitted the display of the image, and released a statement of apology for their “mistake”:

“This team looks at hundreds of thousands of reporters every week, and as you might expect, occasionally, we make a mistake and block a piece of content we shouldn’t have,” a Facebook spokeswoman said in a statement to TheWrap. “We have already taken steps to prevent this from happening in the future and we sincerely apologize for any inconvenience.”

While Facebook, as a private corporation, can have rules about content, the uneven and sometimes arbitrary enforcement of those rules is problematic. The banning of The New Yorker‘s Facebook page is an unfortunate example of the knee-jerk censorship that comes of overly broad content policies, and it also demonstrates the power of public ridicule in the face of foolish decisions made by large corporations.