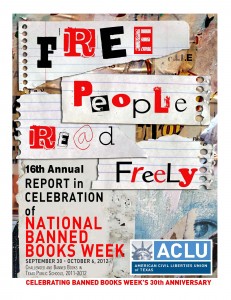 Each year, the ACLU of Texas contacts the 1,000+ school districts in the Lone Star State to find out why books are banished from classrooms, library shelves, and reading lists. For 2011-2012, they were excited to find that book challenges are down, but the fight is far from over. In “Free People Read Freely: The 16th Annual Report in Celebration of Banned Books Week,” Texas ACLU Executive Director Terri Burke writes in her forward:

Although I continue to be surprised at some of the books that are challenged and the reasons why, I am happy to report fewer books were banned last school year. In many cases, those that were banned or restricted were in elementary school libraries where their content was considered too mature for younger children. The books weren’t denied to older students.

According to the report, the results of challenges in Texas schools ran the gamut:

Some schools indicated they “restricted” these books from the elementary schools, either moving to a higher grade level or restricting only for the child whose parents protested its use. Some chose to ban the challenged books all together.

The 2011-2012 school year saw the following books removed from shelves:

The following list of titles, which includes a notable selection of frequently challenged classics and Jeff Smith’s acclaimed series Bone, were restricted in Texas libraries during the 2011-2012 school year:

Let’s take a look at two comics series of note that made the lists of banned and restricted books: Sidekicks and Bone.

Sidekicks, a series by Dan Santat, focuses on the superhero Captain Amazing and his search for a sidekick among his four pets, who compete with each other for the position. The ACLU report describes the ban:

Bone was not removed from school campuses, but it was restricted:

The ACLU of Texas describes each book that faced challenge in schools in their report, providing an illuminating look at the books that were challenged and why they were retained, restricted, or banned. The report also features an interview with Tony Diaz, who is the founder of Nuestra Palabra: Latino Writers Having Their Say and Librotraficantes, the organization that is “trafficking” banned books from the defunct Mexican American Studies Program into Arizona schools. You can download a copy of the complete report here.