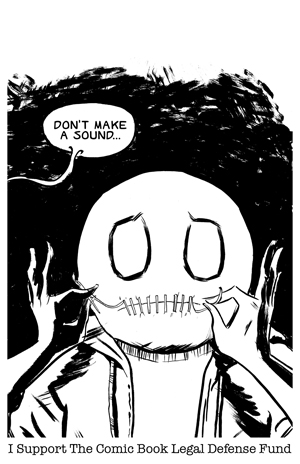 Depicting the titular character unable to exercise his right to free speech, the print will be limited to one hundred pieces, and is signed by both Struble and Grace. Printed in Los Angeles by local illustrator and screen printer Dave Kloc (www.davekloc.com), the haunting prints measure 11″ x 14″ inches, perfect for any frame. “I have been a huge advocate and fan of The Comic Book Legal Defense Fund, and this opportunity felt like a great way to tackle an on-going issue in media with our readers,” says Grace.

All proceeds of the print will go to the Comic Book Legal Defense Fund. Li’l Depressed Boy creator and writer S. Steven Struble states: “The Li’l Depressed Boy is trying to find out who he is and without the ability to express himself, this would not be possible. We support the CBLDF fight to champion free self-expression within our medium.”

New York Comic-Con takes place on October 11-14 in the Jacob K Javits Center. The CBLDF booth (#906) will be the destination for this rare treat. Sina Grace will be located at Artists Alley, table R3, with copies of his newest graphic novel, Not My Bag, on-hand. For more information, visit www.sinagrace.com.

ABOUT THE COMIC BOOK LEGAL DEFENSE FUND
Comic Book Legal Defense Fund is a non-profit organization dedicated to the protection of the First Amendment rights of the comics art form and its community of retailers, creators, publishers, librarians, and readers. The CBLDF provides legal referrals, representation, advice, assistance, and education in furtherance of these goals. http://www.cbldf.org

ABOUT THE LI’L DEPRESSED BOY
Originally an anthologized web-comic, THE LI’L DEPRESSED BOY found its print home at Image Comics in 2011, maintaining a cult status early on. The series follows the non-adventures of a rag doll boy on his quest for love, happiness, and a good album on vinyl. For more information, visit www.depressedboy.com. On Twitter — @struble and @SinaGrace