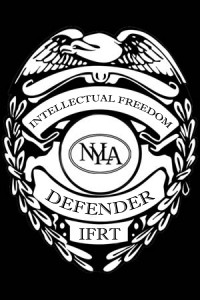 Saratoga Springs, New York, welcomed the New York Library Association for its annual conference this past week. On Thursday, the Association’s Intellectual Freedom Round Table provided a forum for CBLDF Executive Director Charles Brownstein, Chris Finan with the American Booksellers Foundation for Free Expression, and Acacia O’Connor with the Kids Right to Read Project to discuss the state of the First Amendment in the 21st century.

Each presenter did an excellent job of describing the work of their organization and the battles that they have faced and continue to encounter. They noted that many instances of quasi-censorship go unreported, and the fight to preserve our access to ideas in new formats is ongoing. Brownstein used this forum to discuss the manga format and how it and the Japanese cultural norms that inform it are misunderstood. O’Connor spoke about the problems that typically arise in schools and how the censorship issues that these represent are usually hidden from view.

Although librarians did not always view their role as one of making all materials available to everyone — some of the early American practitioners of this field believed their role was to gather, collect, and make “good materials” available to library users — the defense of intellectual freedom has been a core value of our profession since the 1930s. Evidence does exist that demonstrates early library leaders were not averse to building their collections with heretic or controversial materials (Naude, 1650) and every librarian learns about Ranganthan’s 5 laws, which include the principles of “Every book has its reader,“ “Every reader has his book,” and “Books are for use.”

Toward the end of this wonderful forum, discussion ensued about how to get more people involved in the fight to preserve and defend our intellectual freedom rights. How do we enlist a cadre of advocates for our right to read or view what we want to read or view? Why don’t more members of our association or the broader American society come to forums on intellectual freedom issues? What can we do to educate them on the issues that we are concerned about? And as I thought about these questions, I realized that maybe we are the problem as well as the solution.

Effective politicians know that if you want someone to vote for you, then you need to ASK that person to give you her vote. They know that you need to meet people where they are, understand their needs, and then help them find a way that is comfortable for them to get involved. It is never safe to assume that just because an issue is important to you, then it will be of similar importance to someone else.

During the course of the conference, I was engaged in a campaign to increase the membership of our roundtable. We tried to develop a conversation with every person who passed our table. We asked the individual about his or her membership in the Association, and we encouraged each person to consider the fact that intellectual freedom is a core value of librarianship.

We offered the individual a badge that he or she could wear at the conference and back at work to indicate that he or she is a defender of intellectual freedom. In short, we provided our colleagues with an opportunity to reaffirm their belief in our values and make a positive statement of support for the principle of intellectual freedom. Others were given an opportunity to donate a small sum of money to wear the badge of honor. By the time the conference adjourned, membership in our Intellectual Freedom Roundtable had almost doubled! Now, the work begins to keep these members active and committed.