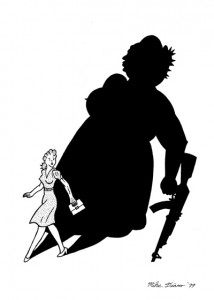 In conjunction with a month-long exhibit of his work in London, cartoonist Mike Diana gave an interview to Vice.com about his career. Diana initially gained the attention of a national audience when he became the first United States artist to be jailed as a result of his work. While Diana was sentenced to three-years probation and more than 1,200 hours of community service, he also credits the court case with exposing his work to a wider audience.

Diana tells Vice that Europe is a much “freer” society than the United States in regards to its conservatism. Drawing from his own personal experiences of moving to Florida from New York when he was eight years old, Diana relates that going to church in Florida involved a screaming priest who would tell his congregation that they “would burn in hell and the teachers carried around paddles that they’d hit the kids with.”

Diana’s art career began before he moved to Florida, when he began to draw monster faces on the work of other artists. “My father would buy me these stickers with ugly faces drawn on them called Ugly Stickers and I would draw my own monster faces on them,” he tells Vice. “I also remember when I had to draw a family portrait as a school assignment once, and I drew my whole family naked. When my teacher called me out, I quickly drew clothes on.”

After living in Florida a few years, Diana got into the underground comics scene. Again, Diana’s subjects involved monsters and sex, and in a short time, he began “to feel like I wanted to publish my own comics, too. My mother worked as a secretary at the local police station and I would go there and print copies of my comics on the Xerox machine.” After graduating from high school, Diana began publishing his own fanzine, though he kept this information from his parents.

Diana cites the disconnect between the Florida art scene and the Floridian nightly news as inspiration for his controversial artwork: “The rest of the ‘art scene’ in Florida consisted of paintings of sunsets and pink flamingos. It was depressing. As a teenager, I used to watch the nightly news and there would be countless reports of rapes and murders. I think that’s what got me into drawing people in bad situations.”

All of this led to Diana’s arrest and subsequent conviction. As for the actual arrest, Diana relates that he “was charged with six counts of obscenity: distributing, advertising for sale and publishing obscene material.”

The offending comic was Diana’s Boiled Angel series. The cover of the sixth issue depicted a man pulling a foetus out of a woman, and:

…the guy kind of looked like me — almost like a self-portrait. I’d been influenced by a set of killings that had happened in Gainesville, Florida, where five students were killed and no one knew who the killer was. I sent out maybe five copies when one day, as I was returning home from Christmas shopping with my mother, we found two detectives waiting for me on our doorstep. They had a briefcase and pulled out “Boiled Angel #6″.

Detectives met Diana at his door one day, and one of them later ordered copies of Boiled Angel, reportedly to put on file with the state’s Attorney office. Charges eventually followed:

The prosecutor, I think, took the case mainly so he could make a name for himself. He wasn’t an old conservative guy, he was young. So I was sent a letter from the state attorney’s office accusing me of three charges of obscenity and I had to go to court to plea. The morning I was going to court, I saw the newspaper and it said I was facing a possible three years in jail, so I started to realise it was a bigger deal than I’d thought.

I showed up at the courthouse and there were two groups of protesters. One was called ‘Women Opposing Pornography,’ then there was a group of older church women who were crying on the news about how I was making a bad name for their town. I plead not guilty and I eventually contacted the Comic Brook Legal Defense Fund. I was the first case that they’d had of an artist that had been charged.

CBLDF helped Diana during his 1994 trial. Diana’s work contains graphic and often shocking depictions of society’s most serious problems: child abuse, date rape, and religious corruption, and the Florida jury found Diana guilty of publishing, distributing, and advertising obscene material. They agreed that his work “lacked serious literary, artistic, political or scientific value” because it did not compare to such works as The Grapes of Wrath or Picasso’s “Guernica.”

With the jury’s decision, Diana became the first American artist ever convicted of obscenity for his work. Diana was sentenced to a three-year probation, during which time his home was subject to inspection without warning or warrant to determine he possessed or was creating obscene material. Further, Diana was not allowed to have contact with children under 18, and he had to undergo psychological testing, enroll in a journalistic ethics course, pay a $3,000 fine, and perform 1,248 hours of community service. The case was appealed all the way to the Supreme Court, which refused to review the case, so the obscenity conviction was not overturned.