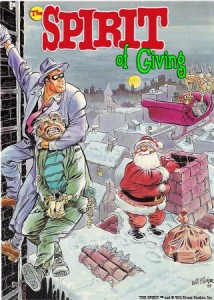 Earlier this week, Zack Smith took some time to spotlight CBLDF’s Spirit of Giving campaign for the Pop Candy blog on USAToday.com. Smith touched base with CBLDF Executive Director Charles Brownstein, who described the campaign in the opening paragraph to a mini essay:

Want to give the best holiday gift to the comics fan in your life this year? Not just a “Cool! How did you know!” gift. But a deep, hyperventilating “OH MY GOD!” gift that they’ll remember forever? And do you want that gift to make a socially responsible difference? Then look no further than the Comic Book Legal Defense Fund, which from now until Dec. 5, is offering the opportunity to get a tremendous selection of graphic novels signed and personalized by some of the world’s greatest comics authors!

Brownstein goes on the describe some of the work that donations to the campaign support, including the defense of Matthew Loux’s SideScrollers and more. Brownstein also rattles of a who’s who of comics creators who are supporting the campaign:

You can read the entirety of Smith’s post and Brownstein’s enthusiastic essay here. As you consider your gift-giving options this holiday, don’t forget you can both find an amazing one-of-a-kind gift and support the important First Amendment advocacy of CBLDF, all in one place!

← Mike Diana on the Highs and Lows of Creating Controversial Art
The Gaiman Foundation Contributes $60,000 to CBLDF for Education Program →