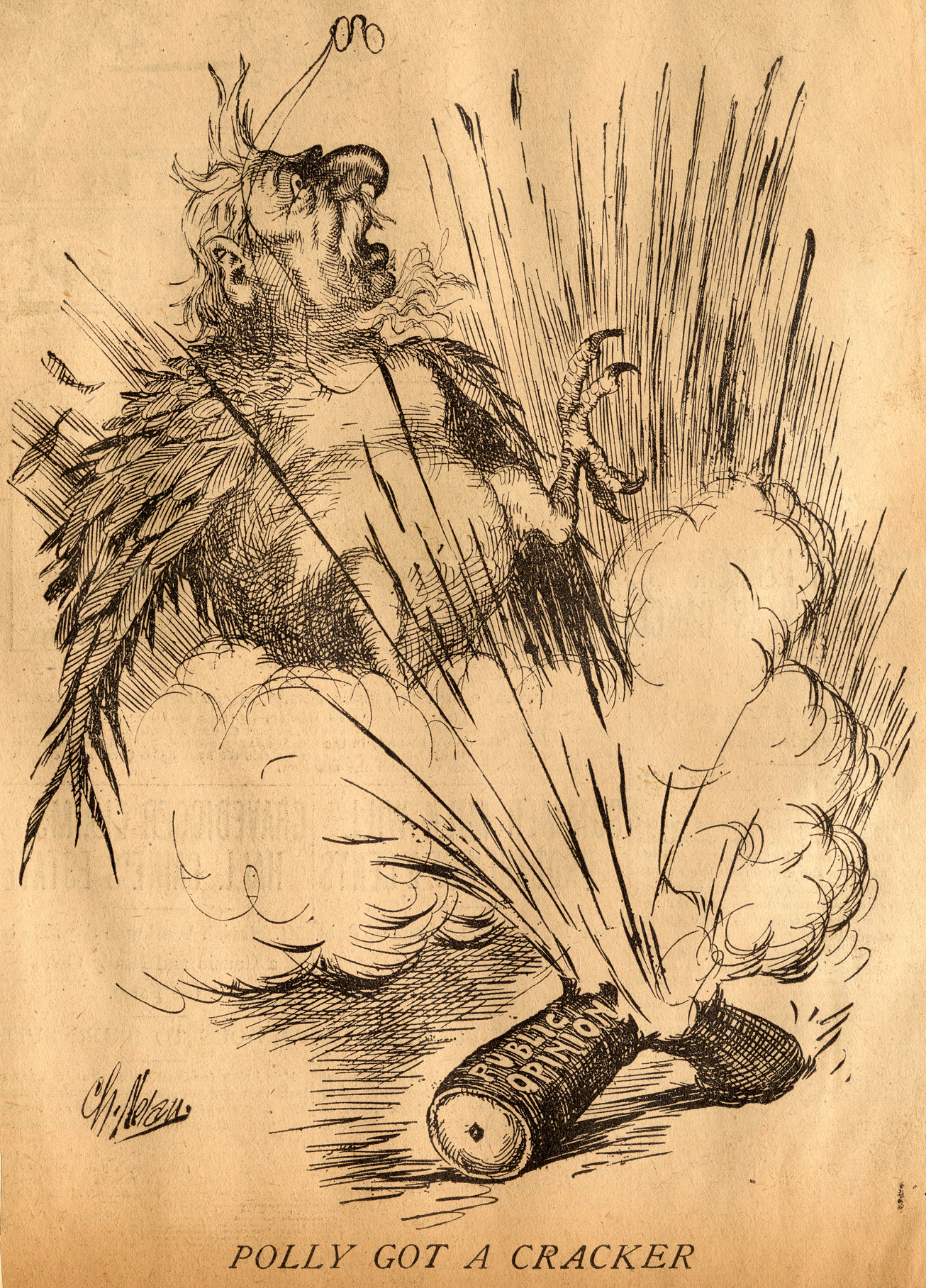 A recent snippet in Comic Book Resources’ column “Comic Book Legends Revealed” brought to our attention a 1903 tale of attempted cartoon censorship and political intrigue in Pennsylvania. We’ve found some more background info in an article by Steven Piott from the journal Pennsylvania History, and we hope that our readers will find it as interesting as we did!

In 1902, a judge by the delightfully cartoonish name of Samuel Pennypacker was nominated as the Republican candidate for governor of Pennsylvania. At the time, the state Republican Party was tightly controlled by U.S. Senator (and Pennypacker’s distant cousin) Matthew Quay, who handpicked candidates and appointees at all levels of government. Although it was widely suspected that Pennypacker was only a Quay puppet, the man himself naively believed that he had won the nomination on his own merit. At a campaign speech in Philadelphia, he puffed that “it may well be doubted whether ever before in the history of American politics such an event [as my nomination] occurred.” Unsurprisingly, his arrogance was mocked in an editorial cartoon by Charles Nelan of the Philadelphia North American newspaper, who depicted Pennypacker as a parrot clutching the nomination in one talon and preening before a mirror.

Encouraged by a positive public response to his cartoon, according to Piott, Nelan did not let up:

During the final two weeks of the campaign, an anti-Pennypacker cartoon by Nelan appeared on the front page of almost every issue of the newspaper. Nelan began by depicting Pennypacker as Quay’s pet parrot, perched upon the top hat of the Senator. He followed this with a series of ‘Penny Goose Rhymes’ in which he depicted the candidate as a parrot waiting to feast at Quay’s table of ‘rake-offs’ and bribes, as a pirate waiting to take the oath of allegiance to Captain Quay, and as a naive maiden about to fill the nomination bucket at Quay’s well of political manipulation. Nelan then produced a series of ‘Quay Natural History Exhibits.’ Again, Pennypacker, as Quay’s trained parrot, consorted with ‘fee grabbers,’ felons, ‘grafters,’ ‘rippers,’ and special interest lobbies. Finally, on the eve of the election, Nelan showed Quay offering the parrot a cracker, the symbol of a purchased nomination and bought election.

Pennypacker was elected despite the press criticism, but he seems to have never forgiven Nelan or the North American. Shortly after he took office, an anti-cartoon bill was introduced by state legislator and Pennypacker crony Frederick Taylor Pusey. The bill proposed a ban on “any cartoon or caricature or picture portraying, describing or representing any person, either by distortion, innuendo or otherwise, in the form or likeness of beast, bird, fish, insect, or other unhuman animal, thereby tending to expose such person to public hatred, contempt or ridicule.”

According to Piott, the staff of the North American took Pusey’s bill as a personal challenge:

Nelan defiantly caricatured the author as a ‘Pus(s)ey Cat,’ and it was rumored that when Pusey rose to report his bill back to the House, he was greeted with a chorus of ‘meows,’ cat calls, and ‘scat’ from some of the other members.

[A] front page cartoon-spread…portrayed prominent state government officials as an oak tree, a beer stein, a turnip, a squash, and a chestnut burr. The humor of this (plus the futility of his bill) escaped Representative Pusey, who by now had been depicted as ‘Pus(s)ey-willow,’ ‘Pus(s)ey-in-boots,’ and a small potato.

Pusey’s bill, widely mocked by the press and even his fellow legislators, seemed unlikely to pass. Instead, a different bill was proposed by Rep. Samuel W. Salus of Philadelphia. This one required the names of newspaper editors and proprietors to be prominently printed in every issue, and held them legally responsible for libel committed by any member of their staff. It also provided for remuneration “not only for injury to business or reputation, but also for damages relating to physical and mental suffering.” As this would be difficult to prove (or disprove) and quantify, the bill seemed a convenient way to keep newspapers quiet for fear of being sued. A single sentence also made the use of cartoons in the commission of libel an aggravating factor:

Whenever…such libelous matter has been given special prominence by the use of pictures, cartoons, headlines, displayed type, or any other matter calculated to specially attract attention, the jury shall have the right to award punitive damages against the defendant or defendants.

Salus’ bill easily passed through the legislature, though at least one lawmaker admitted that he felt pressured to support it in exchange for $400,000 disbursed to his district. Meanwhile, Nelan and the North American continued to wage war in pictures:

Showing complete disdain for the governor, Nelan drew his most venomous cartoon yet. He depicted Pennypacker as a dwarf, standing on a stool, about to thrust a shaft into the spinning wheels of the public press to stop ‘this most conspicuous of ills.’

Pennypacker, of course, eagerly signed the bill into law. In a defensive eight-page signing statement packed with florid analogies, his disdain for the press and especially cartoonists was evident:

A mayor of our chief city has been called a traitor, a senator of the United States has been denounced as a yokel with sodden brain, and within the last quarter of a century, two presidents of the United States have been murdered, and in each instance the cause was easily traceable to inflammatory and careless newspaper utterance. A cartoon in a daily journal of May 2nd defines the question with entire precision. An ugly little dwarf, representing the Governor of the Commonwealth, stands on a crude stool. The stool is subordinate to and placed alongside of a huge printing press with wheels as large as those of an ox-team, and all are so arranged as to give the idea that when the press starts the stool and its occupant will be thrown to the ground. Put into words, the cartoon asserts to the world that the press is above the law and greater in strength than the government. No self-respecting people will permit such an attitude to be long maintained. In England a century ago the offender would have been drawn and quartered and his head stuck upon a pole without the gates. In America to-day this is the kind of arrogance which ‘goeth before a fall.’

Some key differences between “England a century ago” and the United States in 1903 seemed to escape Pennypacker, as he expected government officials such as himself to be treated more like royalty than elected servants of the people:

The Commonwealth [of Pennsylvania] is interested that those who render her service should be treated with deference and respect, so that when they go forth in the performance of her functions those to whom they are sent may feel that they are vested with authority.

Pennypacker also expressed outrage on behalf of Rep. Pusey, “the upright and worthy gentleman trained to the law, who has worn a sword in the service of his country.” His poorly concealed personal grudge against cartoonist Nelan is perhaps most evident here:

[S]ome outcast is hired to pervert his name from Pusey into ‘pussy’ and to draw contorted cats which are scattered broadcast over the land in the hope that the vile and vulgar will snicker at his wife and children when they pass. Could the most just and kindly of judges, could any friend of the press meaning to be fair, say that should he bring suit against the newspapers which committed this outrage and indecency he ought not to be permitted to recover what a jury shall regard as compensation?

The editors of the North American, for their part, suggested a new coat of arms for the state that “would include an impaled cartoonist’s head, a ‘gag,’ a muzzle, a dwarf on a stool, a pussy cat, and a jackass in knee-high boots” similar to the ones Pennypacker was wont to wear. In reality, though, while the governor may have gotten his way in the statehouse, he ultimately lost in the court of public opinion. His vaunted press gag law, never enforced even while he was in office, was repealed in 1907 as soon as his single term expired.

← President Recommends Yet More Research on Video Games, Violence
How You Can Report a Library Challenge to ALA →