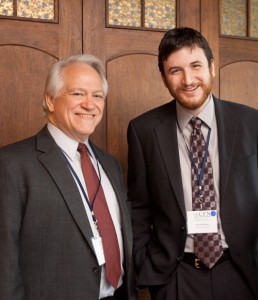 In 2007, Zaccari expelled Barnes for protesting VSU’s plans to construct a pair of parking garages on the state university’s campus. The primary reason for Barnes’ expulsion: Barnes had initiated a civil campaign urging VSU to pursue environmentally friendly alternatives to constructing the parking garages. Part of this campaign included Barnes posting flyers similar to the one below online and around the VSU campus. 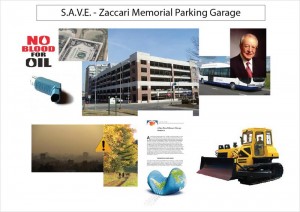 A recreation of the controversial flyer. Photo courtesy of TheFire.org.

In the official notice of expulsion Barnes received from VSU, Zaccari labeled the above collage a “threatening document” and claimed Barnes posed “a clear and present danger to this [the VCU] campus.”

Aided by Mr. Corn-Revere and the Foundation for Individual Rights in Education (FIRE), Barnes was able to convince a federal jury at the U.S. District Court for the Northern District of Georgia that Zaccari was personally liable for violating both his right to due process (for expulsion without hearing) and his First Amendment right to free speech. The ruling the Eleventh Circuit handed down earlier this month upheld the District court’s decision and awarded Barnes $50,000 in damages. (You may recall that Mr. Corn-Revere also helped lead CBLDF to victory in Brown v. EMA.)

Free Speech rights on college campuses have always been a muddy issue for First Amendment advocates. CBLDF has highlighted the issue a number of times, most recently in January, when the editorial board of the University of Wisconsin, Madison’s student newspaper decided not to run artist Vincent Cheng’s “Ya Boi, Inc.” comic strip. CBLDF also covered an article by FIRE president Greg Lukianoff, in which Lukianoff listed his top-10 favorite censored images on college campuses. The list included two cartoons and a poster of fan-favorite Nathan Fillion as Firefly‘s Malcolm Reynolds.

“…nearly 63% of more than 400 of America’s largest and most prestigious colleges maintain policies that seriously violate First Amendment principles.”

Barnes was expelled for a visual image he created, and visual images in the form of cartoons are frequently a reason campus newspapers, faculty, and students are admonished. The Barnes decision is certainly a victory for free expression, including that involving visual images.

Rick Marshall is an attorney who recently earned a legal master’s degree in Intellectual Property law from the George Washington University Law School.