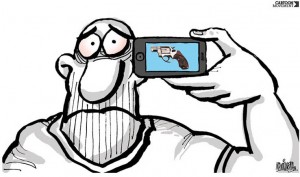 As we were traversing the interwebs today, we ran across an enlightening interview on Cartoon Movement, a website dedicated to political cartoons and comics journalism around the world. The interview is with three Cuban cartoonists, who shared their perspectives on censorship and the role cartoonists play in a nation’s political and social evolution.

When asked about censorship in Cuba, all three cartoonists — Adán Iglesias Toledo, Alfredo Martirena, and Osvaldo Gutierrez Gomez — confessed to a belief that censorship is universal, no matter which country a cartoonist lives in. According to Adán:

Adán: Of course there is censorship. I do not think there is a country where this is not present. In the Cuban case it has its peculiarities. On of the criteria for the press is that everything published should have an educational value; many topics are not published because they supposedly lack this educational value. Some of these topics, in my experience are: religion, racism, homophobia. But there are others that are difficult to classify, and cartoonists are sometimes clever in the way they subtly include topics in their work.

In his response, Alfredo spoke of self-censorship but confessed to never having felt censored himself:

Alfredo: I believe that there is censorship in media all over the world, starting with editors, in accordance with interests supported by the big news corporations, which silence inconvenient news and promote and adulterate others akin to their interests. We may have censorship in Cuba, but in my case, as a cartoonist, I have not felt it. I collaborate with many international media, magazines, and I have never felt limited and the works I sent have never been censored…

Osvaldo: I belief there is some degree of censorship everywhere in the world. Here in Cuba there is censorship as well, with a single party and media who all report on the same issues. I also belief that there is more self-censorship than censorship, a cartoonist not doing a cartoon on a certain topic, thinking it will not be published. As for me, I have never let that stop me, and will do a cartoon anyway. If they publish it or not, that is no longer my responsibility. I think that many of our artists are on the side of the Revolution and its leaders, and criticism is often about the social problems that exist in my country.

The cartoonists go on to describe their predictions for Cuba’s future and their take on how political cartoons play a fundamental role in the growth of the country. You can read the entire interview here.