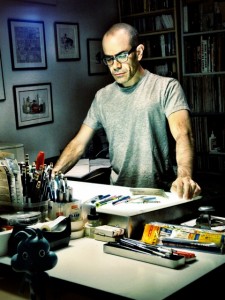 Bob Fingerman’s contributions to the world of comics have been many and varied. Fingerman toiled in the disparate realms of kiddy satire, men’s magazines, sci-fi, and illustration, producing work regularly for Cracked, Al Goldstein’s infamous tabloid Screw, Penthouse Hot Talk, Heavy Metal, National Lampoon, and High Times. He also worked for The Village Voice, Business Week, and other periodicals. With the recent release of the deluxe collection Maximum Minimum Wage from Image Comics, Fingerman took a moment to write a guest post for CBLDF about the depiction of sex in his work.

With the release of the new deluxe collection MAXIMUM MINIMUM WAGE from Image Comics, I’ve been asked to explore one aspect of its content in contrast to its portrayal in other things I’ve done. 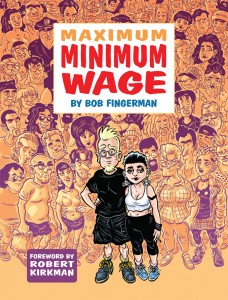 I’m not going to sugar coat this: In my long, storied career (yeah, it’s storied – wanna make something of it?), I’ve been known to depict sex once or 50 times. In the ’80s, and to a lesser degree the early ’90s — the Golden Age of Porn, at least for me — I earned the majority of my income producing work for men’s glossies such as Penthouse Hot Talk, High Society, Live, Cheri, Leg Show, Penthouse ComiX, and others. And when I say others I mean Screw, the newsprint bottom of the barrel, both in terms of cachet and pay. The pay? The pay was almost always at least double the standard comics page rate. Producing a handful of pages a month left me plenty of leisure time or time to do art for myself and kept me living pretty well. Good times.

After years of doing this stuff, the bottom dropped out. The economy (under Bush I) tanked and suddenly the mags I worked for decided to tighten their belts and cut editorial niceties like the funnies. There went my income. But I still had this odd compulsion. I weaned my adult comics interest on Heavy Metal magazine and underground comics. I was hardwired to do naughty stuff on paper. I also wanted to finally release a solo comic. Retaining the rights to all those smutty comics I’d done, I contacted the editor of Eros Comics (the porn imprint Fantagraphics had just started to goose their finances). It might seem absurd, but back in the early ’90s, adult comics sold well. Really well. I cobbled together my first collection from an ongoing series I’d done for Live. Or High Society. I can’t remember which.

It was called Atomic Age Truckstop Waitress. It was horribly printed on glossy paper in Mexico, each cover slightly different than the previous. If an artier person (or one more clever about marketing) had released it, you could say the inconsistent color was a choice, that each issue was a unique objet d’art. I released a few other titles with Eros, some reprints, some not. One not was Skinheads in Love, which in a way prefigured Minimum Wage. It, unlike my soft-core efforts for the men’s magazines, was hardcore. It portrayed the carnal activities of a couple of totally-not-hate-group skinheads (heck, I didn’t even give the female character proper skinhead chick fringe and sideburns). I’d toyed with calling it Hardcore Hardcore and kind of regret not doing so. The title created a little confusion about any possible political affiliations of the cast.

The reason I say it prefigured Minimum Wage (which is really what I’m here to write about, so all this blather is preamble) is that the two main characters, Roy and Simone (not dissimilar in name to Rob and Sylvia… hmmm) were a couple of thinky neurotics. Roy spends much of the comic internally musing about things as they’re going at it. She does likewise. It was hardcore in its frank depiction of Tab A/Slot B action, but it, again, was not intended for stroking.

I wanted to depict a young couple whose primary reason for being together is a good sex life. And in so doing, I wanted to have a frank depiction of such a relationship, but one in which I portrayed sex not for prurience, but as character development. Sex was integral to the bond Rob and Sylvia shared. So, suddenly the personal aspect of sex, one I’d kept at bay my whole career, was now front and center. How could I depict this and not have it come off as exploitative? Well, character development. The series was all about that. Make the readers absorb every aspect of these characters’ lives, and the sex will/should come off as totally organic to the story.

But to a casual browser, the sex and nudity was without context. Over the years several people have said to me, “I thought this comic was all about sex until I actually read it.” Yeah. The actual amount of sex and nudity is probably less than 10% of the content. I am pretty certain some retailers, especially during its serial run in the mid-90s, shied away from ordering because of that integral aspect of the story. They saw boobs and wieners, and that was that.

So, for this new collection, even though times have changed and I think attitudes have relaxed a bit about such stuff, I was faced with the question: Should I tone it down to maybe broaden its appeal? My answer was yes. Which presented a new challenge: How to keep that facet of the Rob/Sylvia dynamic true to its core but restage it so as to make it more palatable to a bigger audience. I knew it was possible. A writer friend of mine once used the phrase, “You haven’t earned the audience’s trust, yet,” in reference to certain content appearing early on in whatever. Bearing that in mind, I bared less flesh right up front.

Anyone who knows me — especially when it comes to Minimum Wage — knows that I am an inveterate tinkerer, right up there with George Lucas. And though I have no “Greedo shot first” reversals in MAXIMUM MINIMUM WAGE, perhaps some purists will bristle at the changes. But the book maintains the spirit without quite as much skin. I know I’m a bit niche, but my niche can broaden out a bit. And frankly the new pages and panels are drawn better anyway, so there’s that. This shouldn’t sound defensive. I sincerely think the product is a better one, and art for public consumption is product.

I once had the dubious honor of meeting Glenn Danzig at a comic convention. I was introduced by a mutual friend who was an art dealer. I had one of my adult comics and gave it to him, albeit a bit abashed. He paged through it and said, “So, you like them big titty women.” It’s not that I don’t, but not the grotesques I portrayed in the comic. Giant, fakey-looking boobzillas. I smirked and said, “Well, my editors do.” He scoffed and said, “Yeah. Right,” stalking off with my comic in tow. He wasn’t right, but he wasn’t wrong.

I do like “big titty women.” But there’s a time and a place.

For more about Bob Fingerman and his work, visit his website, bobfingerman.com.