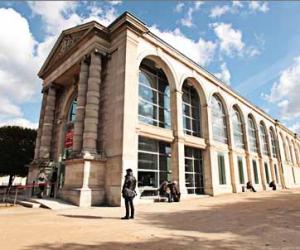 French museum Jeu de Paume found itself the latest example of artistic institutions shut down by Facebook content policies for the photographic presence of that most dastardly body part, the female nipple. According to Gizmodo, the artwork, by early 20th century photographer Laure Albin Guillot, was sufficient for an instant, though temporary ban:

The violation was severe enough for Facebook to block the entire Jeu de Paume page for 24 hours, during which time the museum decided to rethink its policy on posting naughty bits.

In a post after their page was restored to service, Jeu de Paume announced that they would no longer post any nude content, regardless of their own feelings on the pieces’ artistic merit, in the interest of staying on Facebook’s good side.

The article points out that Facebook’s policies can prove confusing to art institutions: nude paintings (for the most part), as well as painted nudes (an annual tradition for Sports Illustrated) are generally deemed appropriate, while nudes involving no paint, be they photographs or, occasionally, editorial cartoons, are a recipe for banishment.

Also worth noting is Facebook’s apparent willingness to display nude photography on their site, as long as it is in the context of their Bing-powered web search.

Jeu de Paume had published nude photographs from previous exhibitions in the past, though it is unclear from the translation of their statement if they had received warnings for those previous policy violations and run the risk of a permanent ban if they draw another warning from the social media site.

← The Beginning of the End for Australian Comics Censorship
Ninth Circuit Limits Search of Electronic Devices at U.S. Borders →