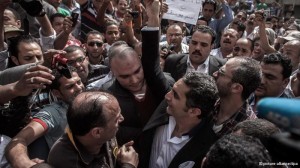 Despite legislation protecting free expression, an Egyptian satirist and Tunisian rapper find themselves caught in a wave of rising post-Arab Spring censorship. Political cartoons have been an ongoing target, and now Bassem Youssef and Weld El 15 have both been forced to appear in court to defend themselves against anti-government charges. According to DW.de, “the two cases point to ongoing efforts by Islamist forces to use the courts to muzzle criticism of North African governments.”

Amnesty International’s Diana Eltahawy told DW.de that there have been 33 separate cases of “activists, bloggers, and politicians” charged in relation to matters of religious defamation in recent weeks, which she categorizes as “judicial harassment.” While dictatorial regimes were ousted during the Arab Spring, artists and social critics are still not being afforded the freedom to express anti-government views. According to Eltahawy:

This comes despite the new Egyptian constitution guaranteeing freedom of expression. Clauses about defamation opened a legal grey area that certain forces are trying to exploit to muzzle criticism, also in the form of satire. Eltahawy pointed out that many of the legal challenges are filed by regular individuals or Islamist lawyers. Slander of political figures and denigration of religious values are the primary charges. But the state prosecution has ultimate say in the matter, Eltahawy added. “They can make the decision not to press charges, not to refer the matters to court,” she said. Though it should be defending free speech, instead “the public prosecutor is increasingly charging individuals for freely expressing themselves,” Eltahawy said.

In the case of Bassem Youssef, a TV satirist who has drawn comparisons to Jon Stewart, Youssef was brought to court on charges that he had insulted both Islam and President Morsi. The Egyptian courts tossed this particular charge out, but other legal challenges remain. Critically, the prosecution isn’t just going after Youssef, but also the TV station that broadcasts his show, as “the prosecution is investigating whether slander and degradation of values could have violated the license of the station that runs the satirical show — indicating the potential reach of such challenges.”

Youssef has received support from Nobel Peace Prize winner Mohamed ElBaradei and Jon Stewart, but he remains his own best advocate. Instead of bowing to pressure, Youssef is not dampening his satire. Walking into court, he parodied President Morsi by “wearing a ridiculously large version of the silly hat Morsi had on at an award ceremony in Pakistan — an act that formed the basis of the initial charge of Youssef undermining Egypt’s leadership.”

In Tunisia, rapper Weld El 15 (real name, Ala Yaakoubi) was targeted “for a video he produced calling the police dogs and accusing them of using excessive force. The rapper disappeared after a co-producer and dancer in the video were arrested this past March.” In a video missive posted to Facebook, Weld El 15 explained that art was his only means of protesting the government. “I was only using the language of the police,” he said. “They have harassed me verbally and physically. As an artist, the only way I could answer them is through art.”

The co-producer and dancer who were arrested were given six-month suspended sentences, but “Weld El 15 was sentenced to two years in jail [on March 22] for insulting the police despite not being present at the trial.” According to DW, “the case is widely seen as a threat to creative criticism against Tunisia’s interim government, which is led by an Islamic coalition.”

In recent weeks, CBLDF.org has brought you news of the role of political cartoons in the Arab Spring and Magdy al-Shafee’s Metro first disappearing and then reappearing on the shelves of Cairo bookstores. While censorship is on the rise in the post-Arab Spring, so is the level of protest against such censorship and the resolve of individuals who have been charged remains strong.