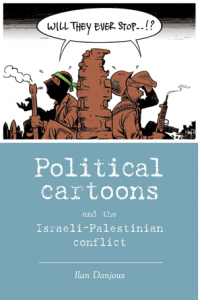 What do editorial cartoons do? Are they really the mind-changing propaganda that censors fear? Or do they simply mirror the ideas, events, and trends already taking place? Cartoon Movement recently published a translated interview with Ilan Danjoux, author of Political Cartoons and the Israeli-Palestinian Conflict, addressing these questions and more.

Cartoon Movement asked Danjoux about his take on the purpose of political cartoons:

According to Danjoux, cartoons can be seen in three different ways: predictors, opinion-changers or chronicles. During the Arab revolutions, Ilan Danjoux observed a dramatic difference in the way Libyan president Gaddafi was portrayed and the way Mubarak was portrayed. “Mubarak was seen as an official, he was not demonized as much as Gaddafi, who became the devil incarnate.”

A connection can be drawn between these depictions and their targets’ ultimate fate: trial for the generic bureaucrat, death for the wicked overlord. However, Danjoux suggests that the relationship between the Arab Spring’s cartoon revolution and the real-life revolutions is more one of prediction than cause:

Cartoons cannot change opinions, says Danjoux. “It has been tried… The allies did it in World War II, and in the 2006 war, the Israelis dropped cartoons on Lebanon to try to say that Hezbollah is a snake. But it didn’t work… Cartoons hardly provide arguments, they just reproduce them… They confirm what people already believe.”

Even cartoons’ role as predictor is less than firm. Danjoux compares them to seismographs and fault lines: showing points of tension where violence is one possible outcome.

In the new regimes, where enemies are less well defined, cartoons target more general concepts. Rather than depicting the new president, for example, Egyptian cartoons tend to focus on the general Islamist influence on the new constitution.

“They are more focused on Islamists generally, while during the revolution, cartoons were very focused on Mubarak. It becomes an ideological struggle for the soul of the revolution, rather than against one person trying to retain power.”

Most important, when analyzing the effect of cartoons on revolution in distant countries, is a sense of cultural literacy. A Gaddafi caricature by a Libyan native like The Cleaver will be much different than one by an American or European, looking in. Danjoux explains:

“To understand the meaning of a cartoon, you need to understand who the cartoonist is and where he is publishing. Is it a mainstream publication, is it a state-funded or commercial newspaper? …As a Canadian, if I draw someone with a green t-shirt, it means they’re environmentalist. If I move that into the Middle East they become Islamists. The meaning of green changes dramatically if you cross the border.”

Considering political cartoons as a measure, rather than a cause, of revolutionary symptoms shines a revealing light on the actions of censors. If these works are merely reflections of existing sentiment and tension, then it seems likely that government suppression is as ineffective as it is unethical.