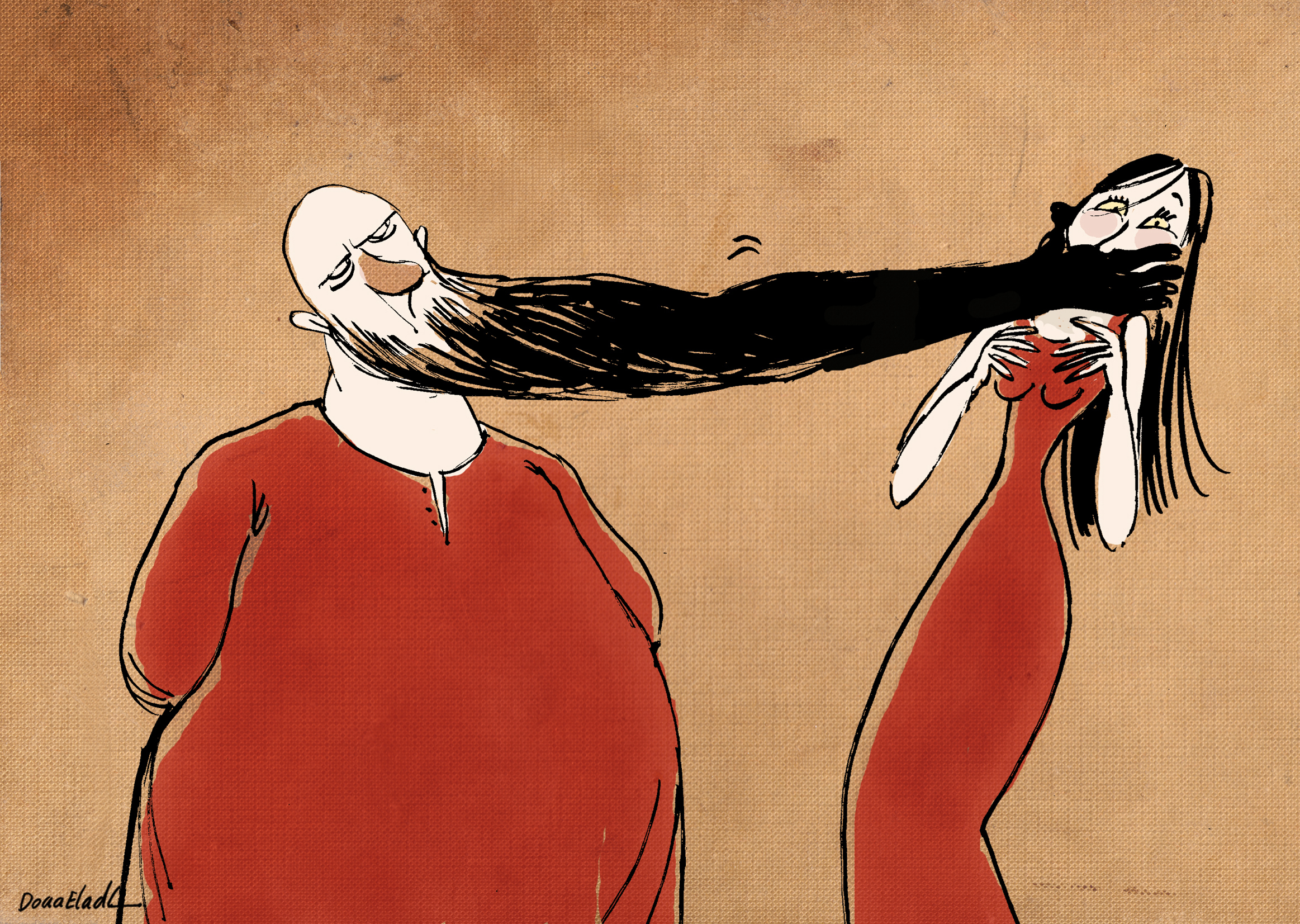 Two years ago, when the Egyptian people joined together to overthrow the government of Hosni Mubarak, women were an important part of the movement. The future looked bright as they anticipated gaining more rights under a new constitution. But since that time, the fragmentation of secular and moderate groups and the dominance of the Muslim Brotherhood over the political process have once again relegated Egyptian women to second-class status. Political cartoonist Doaa el Adl is doing her best to keep issues that affect her and other women in the public eye through incisive cartoons in the newspaper Al Masry Al Youm, despite sometimes heated responses and even a lawsuit for blasphemy.

In a recent interview with Olivia Stransky of online magazine Sampsonia Way, el Adl discussed two cartoons that have provoked the most controversy. First, she criticized female genital mutilation — still widely practiced in Egypt, despite being outlawed in 2008 — with a drawing of a man snipping a red flower from between a woman’s legs. The graphic symbolism shocked many readers, but el Adl says she is pleased to have jump-started a conversation about the practice:

The subject of Female Genital Mutilation has not been handled in such a direct way before. Some readers liked the idea behind the cartoon and were motivated to demand an end to this crime while others attacked the cartoon and rejected my decision to deal with the issue. I believe that these strong reactions to the cartoon is a good thing, whether the reaction is acceptance or rejection.

The cartoon that led to a lawsuit being filed against el Adl showed an angel telling Adam and Eve that they could have remained in Paradise if they had voted the “right” way. Some Sunni Muslims hold that depictions of all prophets of Islam, of which Adam is one, are forbidden. Lawyer Khaled el Masry of the ironically named nonprofit Center for the Defense of Freedoms filed suit against el Adl for blasphemy and insult to Islam, even though she is Muslim herself. Undeterred, she points out that the lawsuit is simply a cover for an attempt to intimidate and silence her:

Legally, a cartoonist may be exposed on charges of insulting the President, or blasphemy. But these legal principles are broad and can be used against you anytime, as happened to me. I drew a caricature that criticized politicians taking advantage of religion and using it to dominate and influence simple people. Unfortunately, I was then accused of blasphemy!

Although her career path has not been easy, el Adl is determined to keep drawing what she feels and is gratified that many Egyptians do appreciate her cartoons. In fact, she says, the difficulties she’s faced have only strengthened her resolve:

Read the full interview here at Sampsonia Way. A few more of el Adl’s cartoons can be found at Cartoon Movement.