In April, Singapore cartoonist Leslie Chew was arrested by authorities for alleged racial insensitivity and sedition. Chew shares his comic, Demon-cratic Singopore, on Facebook, and his arrest was the result of a complaint filed by a private citizen who took issue with the content of some of Chew’s cartoons.

Chun Han Wong writes for The Wall Street Journal‘s Southeast Asia blog, describing the law under which Chew is being investigated:

Singapore law broadly defines sedition as acts agitating against the government and the administration of justice, fostering discontent among citizens, and promoting hostility between ethnic groups. Human-rights groups say the law stifles political dissent, but officials defend its use as essential for maintaining social harmony in multi-ethnic Singapore. Mr. Chew has not been charged.

While Chew has not been charged, he has was held for two days, questioned, and released on about $8,000 bail after his passport, computer, cell phone, and a hard disk were confiscated by authorities.

Chew has published several hundred cartoons on his Facebook page, but authorities are investigating him specifically for two cartoons. The first is critical of the government’s treatment of the country’s Malay Muslim minority, and the second cartoon covers the retirement of a Singapore Supreme Court judge, which authorities allege is detrimental to the court system.

Chew recounted his experience in a comic strip he published on Facebook: 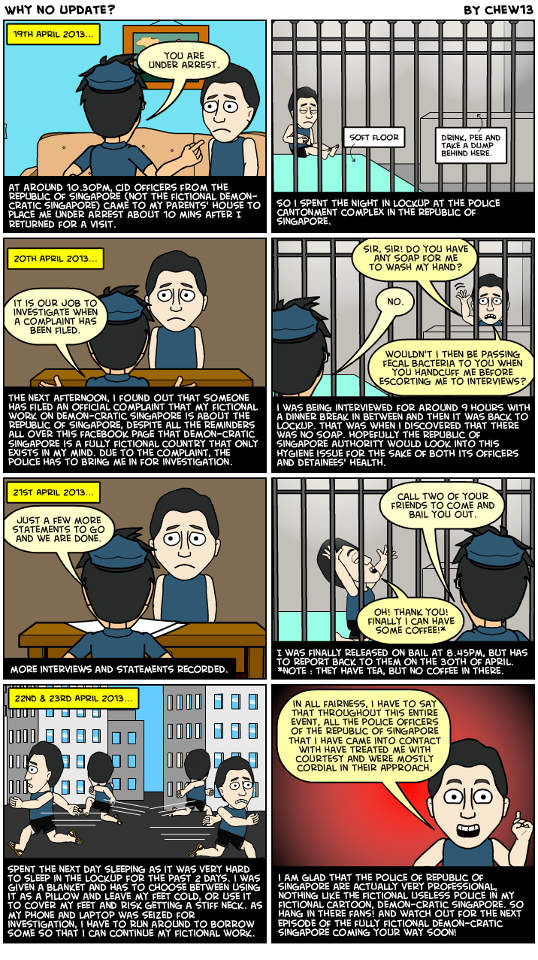 Chew was due before court this week, but his bail was extended until May 11, when he will need to report to police again. If Chew is charged and successfully prosecuted, he faces a fine of about $4,000 and three years in prison.