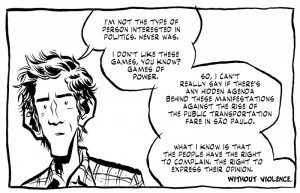 Fábio Moon and Gabriel Bá have long been supporters of CBLDF. They frequently donate their time and original artwork to support our mission to defend free expression. This week, they took to the streets of their home city of São Paulo, Brazil, to fight for the right to freely express their opinions.

São Paulo and several other major cities in Brazil have been rocked by a wave of protests that have become increasingly violent. Brazilian citizens are protesting government corruption, increasing public transportation costs, the financial burden of staging the 2014 World Cup, and more. Police response to protesters has been harsh and militaristic, and acts of vandalism have added fuel to the fire. 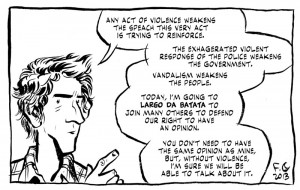 Moon and Bá posted about the protests on their blog, describing the impact they have had on their home city:

Last week, we saw our city (São Paulo) become what looked like a war zone, with the extreme violent police response to a public manifestation. Violence calls for more violence, and by the end of a very long Thursday night many people were hurt for no good reason, wrongly arrested and terrorized by the police force. Add many acts of vandalism to the mix and suddenly you’ve lost sight of what people were there for in the first place: for their right to complain and express their opinion.

Moon and Bá have applied their prodigious artistic talent to voice their opinions on the protests, decrying the violence that has overrun what should have been peaceful assembly. “We believe in people’s right to have an opinion and we’ve turned our opinions, as usually happens, in stories,” they write on their blog, where you can view more of the artwork that conveys their thoughts about the protests and their motivations for risking their own safety to join the protests. 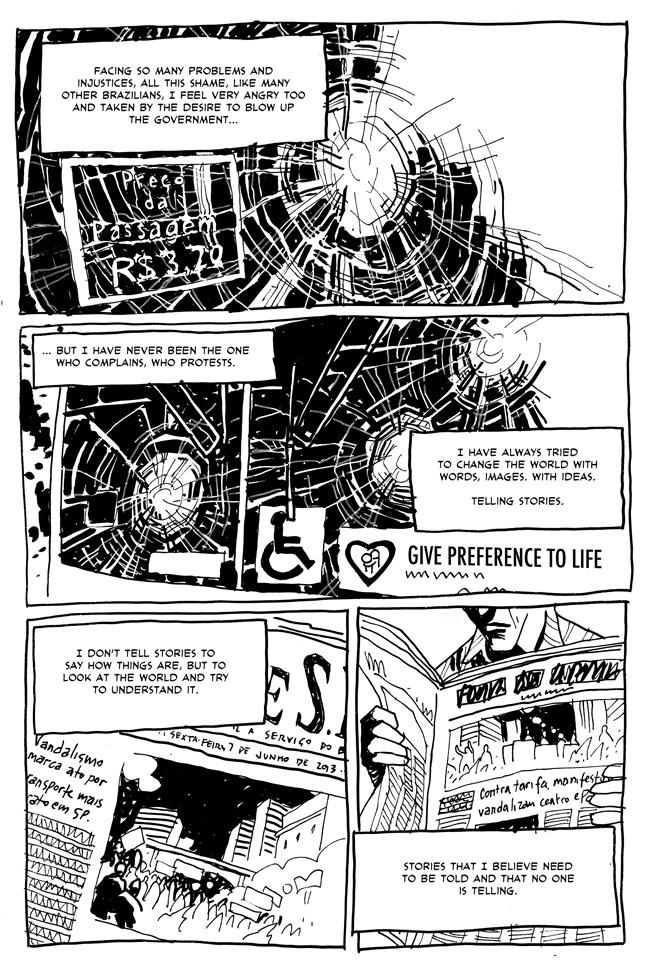