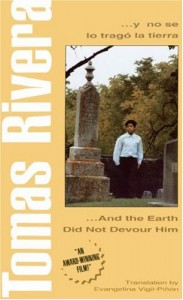 In a 5-2 vote, the Clarke Country School Board in Athens, Georgia, has ordered Superintendent Philip Lanoue to reconsider his decision regarding Thomas Rivera’s award-winning novel And the Earth Did Not Devour Him. But this isn’t a case of a superintendent taking unilateral action to remove a book from classrooms. Instead, he kept the book on school reading lists, and the school board is asking him to reconsider and remove it.

And the Earth Did Not Devour Him is a fictional account of the experiences of an unnamed Mexican boy in mid-century America. Comprised of vignettes and incorporating several different narrative styles, the book describes many of the injustices faced by migrant laborers in the 1950s and 1960s. It is frequently compared to the work of William Faulkner and is considered a landmark work of Chicano art. In 1970, it won the first ever Premio Quinto Sol, an award that recognizes Chicano literature.

The Lowrys took the matter to the school board, which met last week to address the complaint. During the meeting, Chad Lowry voiced his opposition to the book. From the Athens Banner-Herald:

“It’s got language in there that’s not appropriate for our children to read,” said Chad Lowery at Thursday’s board meeting. “We just don’t think it has any place in our classroom, that kind of language.”

Five members of the nine-person board (two board members were absent from the meeting), voted that Superintendent Lanoue should reconsider his decision to retain the book. In fact, a report in The Marietta Daily Journal indicates that some of the board members are vehemently opposed to the book, with one board member telling the Daily Journal that “My intent is for this book not to be on the seventh grade reading list.”

Reports indicate that the Lowrys took exception to a single paragraph in the book. In agreeing with the Lowrys, the school board did not consider the work as a whole, deeming the entire volume forfeit based on a small section of text. The ruling by the school board does not mean that Superintendent Lanoue must remove the book, and legal precedent supports his decision to retain the book, not the Lowrys’ attempt to remove it. Ultimately, this attempt to ban And the Earth Did Not Devour Him will likely fail, but it remains to be seen. Check back here for updates as the story develops.